Or, at least, he was brought to my bumper by his Lexus.

So here’s me: Cruising along coming in to work this morning, going reasonably fast (the freeway’s only a 55, so… well, faster than that), and I’m in the fast lane, passing people in the slow lane (only two lanes, mind you), when this guy comes flying on the freeway and runs right up on my bumper. I’m not really sure what he’s trying to accomplish, since we’re already going both faster than the speed limit and faster than the slow lane. Not to mention I see that, just up ahead, everyone’s slowing way down because of an interchange where folks are merging.

This guy continues to ride me, close enough that I can’t even see his headlights, which is pretty fucking close. I consider doing the brake-tap thing, but then I think, “I don’t trust this guy’s ability to actually stop in time,” so I don’t.

Instead, I decide to try to take a picture. Perfect traffic asshole moment, right? Camera’s right there, so I pick it up, flip it around, and snap a photo: 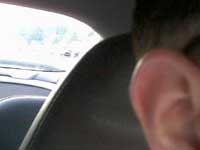 Okay, so that didn’t work too well. (You guys all think I’m taking a bunch of time when I get these pictures, but I’m actually just pointing the camera in the general direction and snapping a bunch of them, hoping for a decent one.)

That’s when I get this idea - take a picture of him in the rear view mirror! 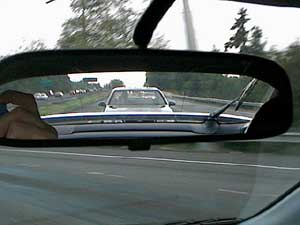 That works much better. You can see just the tops of his headlights because he’s backed off a little there.

At this point, the asshole decides that, even though we’re almost to this interchange and traffic’s really slow, he’s going to try to pass me on the right.

Uh uh. You wanna be an asshole? I can be one, too. Plus, I’m pretty sure I can give you a good run for your money any day of the week, buddy. Time to floor it.

I end up running the guy right up to the slow traffic, when he decides to cave in and get back behind me.

Long about the time I’m getting ready to exit for work, I find out that he’s exiting at the same place. Now’s his chance! Time to make the move! 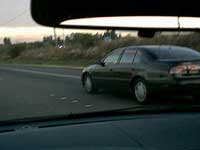 Well, exit time, so I’d best get over, too. Oh, no! I’m feeling bad about myself now! I’m behind the asshole!

Oh, wait a sec, we’re all going really slow in a big long line of cars. Gee, getting that one car in front of me really got you far, man.

I know what it was, though: He was excited to get to work to see if he had made Traffic Asshole of the Week. Congratulations, buddy, you did it!