MSDeploy is a pretty cool installer technology, but it’s not what everyone uses, and my personal experience so far is it’s not flexible enough for me. I’m not the biggest fan of Windows Installer, either, but you can’t say it isn’t flexible.

As part of a recent project, I was working on a web site installer. I wanted Wix to take my web site - including the transformed web.config files and such - and package it into an installer. I’m no Wix expert, but this didn’t appear to be as straightforward as you might think.

The usual way you consume project output (when using the Visual Studio integration and .wixproj files) is to add a project reference to the application project, set up the output you’re interested in grabbing, and telling Wix to “Harvest”: 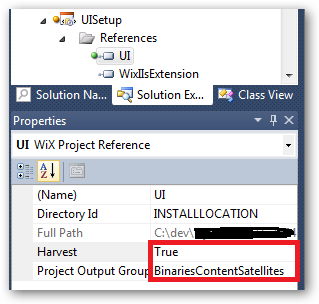 If you do that for a web project, though, the installer ends up dropping the web project assemblies right in the root of the app instead of keeping them in the bin folder like they’re supposed to be. I understand why it’s doing that (because other app types would actually need it that way) but for web projects it’s wrong.

Not only that, but you know that whole fancy web.config transformation thing you can do when you use MSDeploy? Wix doesn’t do that transformation. I want that, so I figured out how to do it:

You can get Wix to automatically consume MSDeploy-staged output from a web project. It just takes a little manual hacking to get it to work. Not much, but it is manual.

Once you have that, it’s time to do a little manual hacking.

This will set web projects apart from other projects - in case you have multiple project references going. This is how you can identify which ones are web projects that needs to be staged.

Now look in the .wixproj file and find a Target node with the Name “BeforeBuild” - there may or may not be one, depending on your project, so if there isn’t one, create one just above the closing </Project> node at the bottom of the file. You may even see a little comment that is there telling you where to place the Target. The empty Target will look something like this:

The magic goes inside the BeforeBuild target. What you want to do there is:

That’s done with just a few lines of MSBuild script:

(Note that it’s line-wrapped for readability, but in the .wixproj file it’s only five lines in the Target.)

Let’s walk through that: 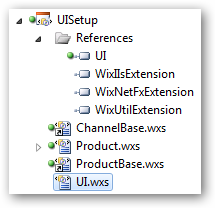 Finally, in your main Product.wxs file, add a ComponentGroupRef to the Feature that should install your web site and use the generated “ProjectName_Project” (e.g., “MyWebApp_Project”) component ID, like in this fragment:

That’s it! (Actually, that wasn’t a small amount of work, but it’s not as hard as some things in Wix.)

Now don’t forget to set up the web site in IIS (that’s not done for you by the above - only getting the files into the installer). Good luck!

UPDATE 8/6/2010: I ran into an issue where a web project that has a project-to-project reference to a non-web project (e.g., a web project that references a class library as a .csproj rather than a .dll) may look in the wrong spot for the class library. I updated the article to accommodate for this. The change is thatif you specify AnyCPU as the platform, you don’t have to specify an output folder and things magically fall together.

UPDATE 3/8/2013: Updated code snippets for Wix 3.8, which brought some breaking changes. The MSBuild “BeforeBuild” snippet uses an ItemGroup with an item called LinkerBindInputPaths for the project package location instead of a PropertyGroup with a property called LinkerBaseInputPaths. Also, in the Product.wxs snippet, the reference to the Product.Generated component is removed since that is off by default in Wix 3.8.

My Xbox 360 profile was on a 512MB memory unit and with the USB flash drive update to the system, I figured it was time to move on up.

Xbox 360 has some sort of “test” it runs USB drives through to determine if the drive “meets recommendations” or is “below recommended performance.” If it’s below the recommended performance, you’ll supposedly get degraded experiences in loading/saving games, reading your profile information from the drive, etc. Unfortunately, the Xbox 360 storage page really doesn’t tell you which drives work other than their Xbox 360 branded drives.

To that end, I tried a couple of drives and found one that worked (the Lexar JumpDrive Firefly) and one that didn’t (SanDisk Cruzer). I figure I’ll put that info here, and if there are people who have experiences they want to contribute, I’ll add it. Send me a link to the drive on Amazon or whatever and whether or not it “met the recommendations.”

Prices listed are current as of the day I added the drive to the list.

1 The drive failed the original configuration but on subsequent attempts succeeded.

Again, if you find one that works or one that doesn’t, or if you’re using one of the above and can confirm functionality, leave a comment or use the contact link on the site to send me a note and a link to the drive on Amazon or whatever. In the event where someone finds a drive that works and someone else finds that same drive doesn’t work, I’ll probably put it on the “fails” list. Better a drive that works for everyone than one that works for “some people.”

Note: Some folks have found that the first time you plug the drive in and test it, Xbox 360 says the drive passes, but on subsequent tests it fails. I’ll move those drives from the “pass” to “fail” tables as they’re discovered.

It’s taken some time and a couple of long Google Groups threads, but with a kick in the right direction from Nick Blumhardt, I’ve got multitenant dependency injection working with Autofac and available as a contributed library.

The basic usage pattern is:

The usage is very similar to the existing Autofac usage you know and love.

There’s a ton of documentation about how to use the multitenancy that includes sample code snippets.There are also somesample console, WCF, and ASP.NET MVC applications in the source treeso you can see it in action.

It’s not currently out there as a binary, so you’ll have to do a source checkout and compile it manually, but I’m sure it’ll show up soon. It was released as part of AutofacContrib 2.5.1 and is available for download.

We’re looking for early adopters to give us feedback on it. If you try it out, please let us know what you think in the Autofac Google Group. What did you like? What were the pain points? Did you find a scenario that didn’t work? How was the documentation? The more feedback we get, the better we can make it! Thanks!

It’s my birthday today and I’m 34 years old. A hearty thanks to the folks who have sent me good birthday wishes via the various communication mechanisms at their disposal including, but not limited to: Twitter, Facebook, email, snail mail, text message, BlackBerry messenger, Google Chat, and telephone. I do appreciate it.

The day ain’t over yet, but it’s been a good birthday so far.

Last night my parents came by for a little while to visit. It was good to see them and they left a funny “Dadcat” shirt (because my girl cat lays on my stomach just like the cat on the shirt), some cool Hawaiian boxer shorts made from bamboo, and a pin from the Maui Hard Rock Cafe (I have a small collection).

Jenn gave me her gifts before she left:

I’ve got the day off from work, which means I can do whatever I want, including not putting any gel in my hair. My head looks like a dandelion puff, but I’m cool with that.

After I’m done here, I’m going to go to McDonald’s and treat myself to a bacon, egg, and cheese McGriddle, my favorite. Then I’ll probably do some more mundane things like shopping at Costco, but I’ll be savoring the memory of that McGriddle, man.

I don’t know if we have some friends coming over tonight or not. If so, cool. Either way, I may end up rolling some Borderlands with my dad. We’re trying to crack level 40. Since the DLC for it is on sale next week, we’ll probably grab it then.

Tomorrow… well, there’s a family gathering, but it’s not for my birthday - it’s for my cousin who recently passed. Sort of a downer, so we’ll just move on. (Also, I anticipate a lot of “What have you been up to?” questions which I can’t answer because how do you explain “implementing multitenant dependency injection in Autofac” to a non-technical person?)

Sunday I do have some friends coming over and I anticipate there being some Rocking and Banding the likes of which have never been seen before. Or maybe we’ll just get some dinner. Either way, that’ll be fun.

So, again, thanks to those who’ve sent in birthday wishes. It’s time for me to go get my McGriddle!

For the second year in a row, Western Display Fireworks decided to trust Jenn and I to run our own show. This year we were in Happy Valley, OR.

The show was a little smaller than last year with around 300 shells and seven pre-fused boxes. It lasted about 18 minutes.

We had a good crew and both setup and cleanup went surprisingly quickly. Some of the crew are folks who had worked with me in previous years, some were new.

Here are the edited highlights:

One of my crewmembers, Alex, also took some great photos.

We had a lot of visits from city and state officials this year, way more than any other show I’ve ever been on. Fire crews checking things out, asking where to be stationed; police figuring out what the best way to secure things might be; the fire marshal running around with his checklist making sure we’re doing things to spec… it was pretty intimidating, to be honest. Shows how much they’re cracking down on this stuff. I guess they had something like 12 police units out patrolling for illegal fireworks that night.

From a retrospective standpoint there are a couple of things to mention:

All in all, it was a great show.

As for next year, I’m not sure what the plan is. It was so hard to get a crew together this year, and there was so much work around coordinating the whole thing - getting the truck, scheduling people to be where they need to be, making sure people have their questions answered, following up to make sure everyone brought everything they were supposed to, etc.

In some cases getting a show together is like getting a small wedding together. Is the caterer there? Did the cake arrive? How many people are showing up? Did you plan for enough food? Too much food? Where the hell is the groom? In the end, I’m questioning whether it might be time to take a break.

If I do, I’d either have to let my pyro license expire or do a make-up show (since you have to have a minimum number of shows to renew your license)… but the only reason I have my license is to do shows, so it’s sort of Catch-22-ish. The only reason to be licensed besides that is basically just to have the ability to say I’m licensed.

Anyway, something to think about. In the meantime, we had a great show this year, so thanks to the crew for all their hard work in making it happen!