We were strapped for dinner ideas last night so we broke out my mom’s recipe for tater tot casserole (or, as I have come to call it, Casserole du Tot).

It was actually pretty decent, all things considered. Jenn claims it was her first ever casserole creation experience, and I think it was mine, too. I’ve eaten various casseroles before, but never have I made one.

This one happened to make like 20 pounds of casserole, though, so I have a feeling it’s leftovers for another week or so. I mean, it calls for a two pound bag of tater tots. That’s a big-a casserole-a.

Something I forgot to mention yesterday: On Monday night, Jenn and I attempted to go to the sneak preview of I-Spy. I was pretty psyched about seeing it, and I think Jenn was pretty excited, too. But I say “attempted to go” because that’s all it was - an attempt.

Here’s how it went down: I signed up for a contest to get a free movie pass to see the movie. I got the pass. Jenn and I met up at home around 6:00p and we were downtown, parked (for $5, no less, because God forbid they have the preview at a theater with a parking lot; of course, my logic was that the movie was free, so $5 for parking was no biggie), and in the theater by 6:15p. The movie was set to start at 7:00p.

We got in line and there were, oh, 100 people in line, give or take, when we got there. That’s not bad; the theater probably seats 300 or so, I think. I’ve been to loads of these previews and that’s not uncommon to see that many people there. So we got in line and a few minutes later the line starts moving. They let like five people in, then say, “Sorry! The theater’s full!” What?! You let five fucking people in. It’s not full.

But it is full.

Turns out, the place that I got the tickets from thought they had the whole preview to themselves, so they gave away enough tickets to fill the seats. But another place was giving away tickets, too - and enough to fill the seats. So only half the people who got tickets were able to get in.

I understand they “slightly overbook the theater” to “ensure a good turnout,” but that’s ridiculous. Especially when the place I got the tickets from only wanted to know one thing about you - “Are you definitely going to be able to make it?” I made it, and I got screwed.

In the end, Jenn and I went to Starbucks and I got me a Ventitm Mocha Frappuccino®. So it wasn’t a total loss, but I was admittedly a little peeved.

What If? Smell Memory

People make associations in their brains. Like the way people remember the words to a song based on how the song sounds - the rhythm, the melody, etc. In some cases, people use songs and rap as a sort of mnemonic device to help themselves remember stuff. A popular example of this is the Schoolhouse Rock series. Hey, that’s how I learned the preamble to the Constitution.

It’s also pretty well known that people can remember thousands of different scents. Who doesn’t know the smell of chocolate or coffee?

So what if people started exploiting the ability to remember smells and exercise that to help in remembering things? I’m not sure how that would work exactly, but the ability to do something like, “Hmmm… spearmint. That reminds me that the Wright brothers made the first airplane.” Or something like that.

I think scratch-and-sniff stickers would become popular again. People in classes would start carrying around these huge sticker notebooks and be madly scratching at stickers during tests. Schools would have to start pumping out a sort of smell neutralizer to stop kids from cheating.

Master of the Pan Flute

I will admit that random thoughts cross my mind when I’m in the car.

For example, today I was driving along, listening to my Police: Live album, and one of the songs (I don’t remember which) had a pan flute going in the background. The first thought in my head when I heard that was not “hey, that’s nice and relaxing,” nor was it “wow, that sounds like Men At Work.”

It was: I wonder what ever happened to Zamfir?

I remember being bombarded by Zamfir, Master of the Pan Flute advertisements while sitting on the green shag carpet of my grandparents’ house, watching the Magnavox console TV (remember those?) and eating Cheetos. (That was around the same time that Roger Whittaker was huge, and I can still visualize the back-to-back call-this-1-800-number-now commercials.)

My grandmother on my mom’s side was still alive back then and she’d let us pick the pennies out of her change bowl to keep. I can still see her sitting, smoking, at the kitchen table in their old house. Always smoking. That’s actually what did her in, in the end.

By the time I had gotten this far in the thought process, I was at my allergy shot appointment so I dropped it.

If anyone out there ever bought or listened to a Zamfir album, drop me a comment.

Looks like Dita von Teese has a website – www.dita.net. Members area, guest area, and an online store with lots of actually quite stylish photos. I’m impressed. 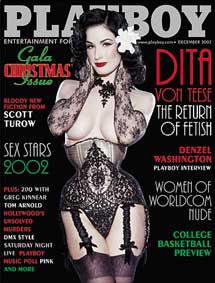