I’m trying to write an HtmlHelper extension that lets you dump out options that build a jQuery UI datepicker on the client. (I know there are some of these out there, but for various reasons I won’t get into… I get to make one, too.)

Something that will let me do this:

In doing that, I’ve uncovered a lot of frustration around getting the options specified on the server over to the client and working in a consistent format.

Anyway, I got to find these through experience so hopefully it’ll help others save some time.

Safari in the Living Room

We had a safari in our living room last night.

Jenn and I are coming to find that Phoenix (now two) has a pretty great imagination. I think she fuels it with some of the stories we read and shows she watches, but the combination of all of that in her little brain is pretty crazy.

She really likes flashlights. Doesn’t really matter if it’s a head lamp, a small flashlight, or a lantern, if it’s a hand-held light source, she’s all over it. We got her a pack of flashlights for Christmas and my parents picked her up a little pink head lamp. She runs around the house looking for dark rooms to inspect, then turns the flashlight(s) on and starts looking. “Daddy, it’s dark in here,” she says. In her little kid not-quite-English it sounds more like, “Daddy, a dock a here.” But we know what she’s saying. “Spooooooky,” she says, as she walks around with the light.

Last night after dinner we were trying to figure out a game to play with her. She wasn’t really interested in the usual tea party or Brio train thing, but she was carrying around her light. At one point she told us to turn the lights off in the room, so we did. Then she handed out lights to the rest of us. Jenn got the head lamp, I got a small lantern. She continued running around to each room telling us to turn off all the lights, and we did until the whole house was dark, just us with our flashlights. I’m sure from the outside it looked like a major burglary.

Once the house was dark, I figured I’d kick things up a notch. “Hey, Phoenix, are we going to the jungle?” She totally went with it. “Jungle, Daddy! Sshhhhhhh! Tigers sleeping!” We walked around the house, inspecting all the corners of every room.

“Phoe, do you see the birds in the trees?”

Jenn decided to take it a little further. “Look out, Phoe, there’s a tiger! He’s going to get you!”

“Nooooo! No tiger eat meeeee! Ruuuuuuuuun!” She took off running, trying to escape one of our very confused house cats, who then got spooked because… well, who wouldn’t be spooked when a toddler four times your size is running rampant and screaming.

“Phoe, look, snakes on the ground,” Jenn said, getting her going even more.

“Snakes icky,” said Phoenix, shining her light on the ground. “No get me.”

I took some throw pillows and put them around on the floor. “Quick, Phoe, step on the pillows! If you stay on the path, the snakes can’t get you!” She hopped up on one of the pillows and started jumping from pillow to pillow. It occurred to me that this is her first official step on the road to the “hot lava” game we all played as kids, where you have to step on certain spots to “stay out of the hot lava.” Chalk one up for my mad parenting skillz.

We played like that for 45 minutes or so, until it was time to get her ready for bed. She was pretty sad to have to stop playing since we were having quite a bit of fun, but I’m sure that’s not our last safari.

In fact, this morning after we got her up she went straight for the flashlights. “Jungle, Daddy.” I had to laugh. “Did you have a good time playing last night? Did the tigers get you?” She nodded her head, her wild curls shaking. “Tigers no get me. Fun!”

The final version of Autofac 3.0.0 is released and you can get it on NuGet or download directly from Google Code.

If you’re upgrading from 2.6, the big changes are:

There are also a ton of issues resolved and we’re working on enhancing the wiki docs. The Release Notes page on the Autofac wiki has the detailed list of changes.

Huge thanks to Alex Meyer-Gleaves for all the work he does (and managing the release process!) and to Nicholas Blumhardt for getting Autofac going.

We switched Autofac 3.0 to be a Portable Class Library so we can target multiple platforms. In consuming the updated Autofac, I’ve noticed some folks receive errors like this at runtime:

You can solve this by getting the latest .NET framework patches from Windows Update. Article KB2468871 and the associated patch specifically address this, however in practice I’ve noticed that specific patch doesn’t always fix it for everyone. I actually don’t know if it’s a different patch that fixes the 100% case or if it’s different patches for different people. What I do know is that once the machine is patched up with the latest, the problem goes away.

If you’re on a domain where there’s an internal Windows Server Update Services instance running, you may think you have the latest but you might not. If it looks like you’re all patched up but still seeing the error, make sure you’ve checked online for updates.

See here, it looks like I’ve got the latest… 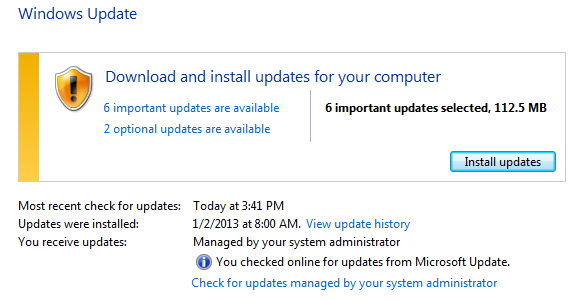 A note on the version 2.0.5.0 you see in the error message: That’s the version of the framework Autofac references as an artifact of being a Portable Class Library. 2.0.5.0 is Silverlight, which is one of the platforms we target. You won’t see it installed on your machine, don’t go trying to manually hack around and install it. But don’t freak out, that version is expected and it’s OK. The .NET framework patches should allow you to dynamically redirect that reference at runtime to the appropriate version (e.g., 4.0.0.0) and the error will go away.