I went after work yesterday and picked up the strategy guide for Grand Theft Auto: San Andreas.

This thing is a monster. 272 pages. About an inch thick. By way of comparison, the strategy guide for the previous GTA game is only 176 pages.

I’ve refrained from playing the game, though, saving it for next week. Or at least this weekend. I know that if I start now, I’ll never stop. Like an addict falling off the wagon. (Where did the phrase “falling off the wagon” come from? Was there some wagon that addicts got on at some point?)

In the meantime, I’ve gone on a minor Amazon spending spree, cashing in on the Yahoo! Visa points I’ve acquired over the past year. To satisfy my cravings, I bought: the seventh season (and final) of Buffy the Vampire Slayer, indicating the end to a lot of money spent until the next killer show rolls around; a Star Wars Millennium Falcon (for the 3.75” figures - I never had one when I was a kid and now I really want one); and, on strong recommendation from a friend of mine, the Sony RM-VL900 learning remote, since I’m sick and tired of having to juggle - seriously - six different remotes because I can’t find a damn remote that just does everything.

I tried for the “Super Saver Shipping” deal on Amazon, where you get free shipping with your order over $50, but it would only end up saving me like $3. Somehow I bought a load of stuff that doesn’t qualify for the free shipping. (Granted, the Falcon comes from Toys R Us and the remote comes from DynaDirect, but come on.)

Thus, I am looking forward to cool things showing up in my mailbox very soon.

In other news, we watched Lost last night, and after having missed two or three weeks’ worth of shows, I don’t feel like I’m behind. Strange, but maybe the little “previously on Lost” segment at the beginning of the show summed things up. Then again, from the hour-long show I watched, I didn’t see a whole lot of plot progression. It was mostly some background and development on the characters themselves, giving insight as to why the people are the way they are. Interesting stuff, but you could sum up in a couple of short clips the development that occurred relating to the island itself. Intriguing, nonetheless.

A little background: If tuna is “Chicken of the Sea,” then turkey is “Chicken of the Devil.” I hate turkey. I hate everything about it. Even further, I hate the whole concept of the “traditional dinner” - stuffing and cranberry sauce and greens and turkey and mashed potatoes and rolls and all that crap. Hate it. Hate it.

Not to mention I’m not altogether keen on the “large family gathering” thing. I can deal with immediate family members, I can deal with my grandparents, etc., etc., but I can’t deal with them all simultaneously. As Mom says, “it drives me bug-ass crazy.”

So. Thanksgiving every year involves me carting ass to two different houses - Jenn’s family dinner and my family dinner - just to get there and go through the whole “you don’t like turkey?” discussion. It goes like this:

Travis: No. I don’t. I haven’t liked turkey for years.

Travis: How can you not like [insert food here]?

Relative: Because it’s gross. But turkey? Everyone likes turkey.

Relative: Whatever. I guess you can just eat mashed potatoes and rolls for dinner.

Travis: Hey, that sounds great. That way not only can I continue sitting at the “kid table” and be kept from any decent dinner conversation, but I can also sit alienated at that table because I don’t want to eat what everyone else is eating. Fucking brilliant. While you’re at it, why don’t you just give me a paper cut and pour lemon juice on it?

And that pretty much sums up how the entirety of Thanksgiving Day goes for me. I have that same conversation with every single relative, over and over, until after dinner (which is at something like 4:00p… who’s hungry at 4:00p?!?!), at which point I’m ready to go into a coma from carb overload and that’s when people decide it’s time to play games.

I’ve declared a moratorium on Thanksgiving this year. I’m not going anywhere. I’ll be at my own home. If people want to eat with me, they can come over.

Nope. None. I’ll go get some Chinese the night before and whoever’s eating at my house can have Chinese with me. I’m a big fan of the General Tso chicken.

Jenn’s told me that she doesn’t want to be there if I’m not having turkey. You’d think that’d make me cave, but in reality, I don’t care. If she wants turkey, she can haul over to the other side of town where they’re eating turkey.

An additional issue has been raised this year, beyond the turkey issue: We don’t have much furniture. We don’t have a full dining room set or a load of extra chairs or anything. We have a couch, a bistro set, a coffee table, and that’s about it. I admit there’s nowhere for people to sit, barring the floor, which is a perfectly acceptable solution to me and people in many, many other countries. I figure if people want chairs, they should bring ‘em.

Does that make me unhospitable, or a “bad host?” Maybe. But I don’t care. I’m tired of having the holidays turn into a rampant waste of my paid time off. I’m on vacation, but it’s a huge chore and only leaves me pissed off when it’s over.

Now I’ve gotta figure out how to tell Mom “no turkey.” We’ll see how that goes.

San Andreas In The House

I have, in my grubby little hands… 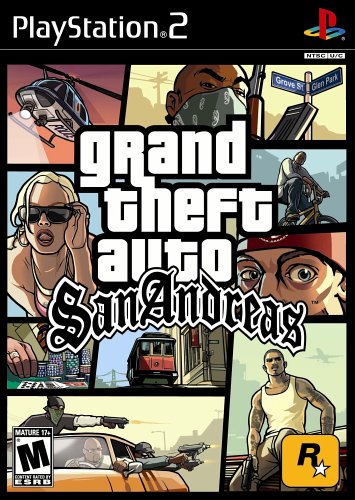 Next week is going to ROCK.

I found last night that I had my driver’s side low-beam headlight out, so I figured I’d head over to Oil Can Henry’s to get that replaced during lunch today. Figure you gotta remove half the engine to get to the damn headlight socket, it’s worth the $20 parts and labor to replace the lamp.

I called ‘em up this morning to make sure they did that service (they do) and to verify they had the kind of bulb my car takes (they did).

Got there at lunch and they do replace headlights, but they didn’t have the right kind of bulb.

Made a quick trip to the auto parts store and got a pair (you’re supposed to replace headlights in pairs) of the only kind they carried that would fit my car. Of course, they only had the top of the line $25/bulb kind, so that’s $50 I’ll never see again.

On the way back, stopped at GameCrazy and got my fix for next week. $50 more, but better spent.

Took the bulbs back to Oil Can Henry’s and it took four guys to install them. The part where they had me turn on my lights to check the installation, asked me to “make sure my lights were on,” then started laughing when I confirmed the lights were all the way on… that didn’t raise my confidence. But when all was said and done, it only cost me $10 to get both changed, so I can’t complain much about that.

All told, that’s $110 I blew at lunch. Damn. And people tell me that my house is a money sink.

Okay, so, like, I was a little harsh yesterday, maybe. Not that I’m recanting my opinion of general incompetence, but I do have to give props to one of the guys in the namespace meeting yesterday who finally came around and saw the importance of this and arrived at a solution equitable for all parties (you know who you are).

Anyway, I cranked up the tunes, stewed about it for several hours, slept on it, woke up still pissed, and now I’m back at work, still feeling a little feisty but not nearly as belligerent as yesterday.

Not that it’s really an excuse, but I just don’t take to being set up for failure too well. I continue to maintain that anyone can code; if you want it done right, in a quality fashion, that’s when you call me in. I won’t sacrifice quality, folks. It’s against every fiber of my being. We will get into it if the removal of quality from the project is a goal (even if it’s not explicitly stated - by providing conflicting requirements and continually accelerating the development process to an arbitrary, too-soon date, that’s what you’re asking for: low quality). Not an option. Not on my watch.