I had a doctor’s appointment this morning for this little dry patch I have on my hand. (Don’t worry, it’s not fungus or anything, it’s just a dry patch.) Anyway, I called in yesterday and had my choice of either seeing the doctor locally (about 10 minutes from my house) or downtown (45 minutes in rush hour traffic). Well… that call went like this:

Travis: I need to make an appointment. Receptionist: We have… second week of August open. T: Nothing sooner? R: Downtown we’ve got one Friday. T: Tomorrow? R: Yeah, I guess tomorrow is Friday, huh? 9:30 in the morning. T: Wow, that’s great. Yeah, tomorrow morning at 9:30. R: Okay, the office is at… [And she proceeds to give me directions…

I got to the doctor’s office today - through rush hour traffic, mind you - and it turns out my appointment is not today, it’s next Friday.

That’s… that’s great. I’m pretty sure I confirmed it as today.

Faced the rush hour traffic back the other way, nothing accomplished, and two and a half hours later in to work than what I normally am.

Also found out that the thing I’ve been working pretty hard on for the last day - trying to shoehorn some very custom code into a generic application - isn’t really required so much as nice to have. One of those “we just wanted to see if we could squeeze that in” things.

That, too, is great. If I can go ahead and spin my wheels some more, it’d be much appreciated. While you’re at it, just kick me in the jimmy. Again! Harder!

I really have to stop watching shows by Tim Minear.

The problem is, he always seems to be involved with shows I love. He worked on Lois and Clark, Angel, Wonderfalls…

The characters are great - you care what happens to them, they’re interesting. The plots are interesting and not only reward the passing viewer but also the long-time devotee.

Networks, particularly Fox, seem to hate that sort of thing. Actual characters that the audience cares about? Pish tosh! We don’t need that when we can make yet another reality series!

I’ve recently become addicted to The Inside, a show about FBI crime profilers. It’s cool, and the only other crime drama I watch besides CSI. I’d wager I like it just as much as CSI, and in some instances I might even say I like it more.

Of course, Fox isn’t renewing The Inside, it seems, and may not even be airing all of the episodes. Once again, a show I really get into, down the tube. Fox really needs to figure itself out.

It’s probably a good thing I wasn’t into Firefly when it was on. I’d be more pissed still. Thankfully, I can still pick it up on DVD and check out what I missed and be retroactively irritated that it, too, was cancelled. 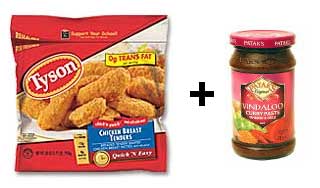 Nightly Jenn and I have a debate about “what sounds good for dinner.” We have plenty of food at home, but generally speaking it’s mostly frozen and we don’t get around to actually thawing anything in time for dinner in the evening. If we were smart, we’d take stuff out of the freezer the night before (presumably while determining dinner for the present evening), but we’re not, so we don’t.

The other problem we end up with is that Jenn and I like about 75% of the same stuff, but have widely differing taste on the remaining 25%. I like spicy food (not like “I’m going to die if I eat any more,” but not “Mmmm this is flavorless,” either); Jenn likes stuff more mild.

Last night found us in our usual quandary: nothing thawed and no ideas for dinner. We found some chicken fingers in the freezer that needed to be eaten, but neither of us could figure out what to do with breaded, shaped chicken nuggets. Jenn wanted comfort food - chicken nuggets with macaroni and cheese.

I decided this would be a perfect time to bust out the vindaloo curry paste I bought a while ago but never get to eat because Jenn’s such a pussy.

While she made her cheesy pasta concoction, I chopped up part of an onion, got some rice going, and came up with a new item on the menu: Chicken Finger Vindaloo.

Now, it sounds bad. (Actually, it sounds really bad.) But it was actually pretty tasty. Which just goes to show that you can cook damn near anything in vindaloo and it’ll end up tasting good. Patak’s Vindaloo Curry Paste: go get some, and cook yourself up some Chicken Finger Vindaloo tonight.

Just as we did last year, Jenn and I went out to Clatskanie, OR, with Greg to light off the city’s fireworks show.

This year, though, we came prepared.

See, last year we were a little surprised by the fact the show was at the sewage treatment plant, which brings along with it some interesting and unhygienic biohazard-style goodness like shit-mist floating off the open vat of sewage nearby and tampon applicators in the dirt you have to bury the mortar tubes in. (For more on that, see last year’s discussion of the show.)

Like I said, this year we came prepared. Our checklist:

This probably seems like a lot of stuff to most of you, but there’s rationale for all of it:

There’s never enough tools. Having extra shovels and a rake to help fill in the mortar trench is handy.

Once you’re done filling in the trench, pending on when the show’s going to start, how soon the setup started, etc., there’s usually a lot of time to burn. Sometimes several hours. It’s good to have stuff to do (read, play games, etc.).

You’re going to be thirsty - be sure to bring enough to drink.

You’re going to be hot and headachy - bring aspirin. And if you’ve got allergies, decongestant, too.

You’re going to be dirty - bring something to clean up with.

You’re going to want to sit down somewhere far away from the shit vat. There’s no shade except right next to it, so you’re going to have to have something to make your own shade (the beach umbrella). Prop your camp chairs and table down under that and it’s like a little paradise in the middle of hell.

You’re going to be lighting things on fire, so have a fireproof jacket (there are usually some you can borrow, but there are generally not enough, so if you’ve got something all cotton, grab it). Knee pads are handy if you’re lighting a lot because you’re crawling on your knees. I’m glad I had them this year - there are huge scorch marks on them from where I’d have knelt on burning embers.

Anyway, you get the idea. Come over-prepared. If you don’t use everything you bring, no biggie. But if you need something you don’t have… well, you’re outta luck. For example, we failed to bring insect repellant (thank goodness another member of the crew thought of that) and there were mosquitoes everywhere.

The show was bigger than last year - this time we had a lot more five inch shells than we did last year, and this year there were just generally more shells to shoot. The other difference this year is that I was listed as the assistant on the show, so I had a little more responsibility. Last year I only lit the first few shells; this year, I was either watching the back of the person lighting or actually doing the lighting for almost the entire show. Knowing what to expect, I was much less freaked out than I was last year, and by the time we were halfway into the show I had gotten totally used to the noise and the smoke and was feeling like an old pro.

Setup took a couple of hours, the show lasted around 25 minutes, and teardown took about an hour. It’s a lot of work for a half hour of excitement, but the show was spectacular and the crowd loved it, so it was all worth it.

That said, I do hope Greg gets us on a different show next year because the hour-and-a-half to Clatskanie to dig in sewer-dirt is a little much. Maybe something with some more shade, or an electrically-fired show? I guess we’ll see.

One cool thing does come out of this, though - This is the third show in three years Jenn and I have done, and since we took the pyrotechnician exam last year and we’ve done the requisite number of shows (and requisite tasks) within the right time frame, we can get our state pyro licenses. I don’t think I’d be comfortable running my own show, but you have to admit - there’s a certain “cool factor” to having a license to use explosives.

I just published the new version of my Junction Icon Overlay shell extension, which I’ve renamed now to “Junction Shell Extensions” because I’ve added a property sheet that allows you to right-click a junction and see where it points to.

If you liked the Junction Icon Overlay, this will probably be a welcome addition.