I updated the Emotifier script so it supports some limited punctuation now. Check it out.

I updated my RSS feed to include the entire article for all entries, so folks just visiting through RSS should be able to get the full… well, whatever it is I’m delivering here.

Okay, I thought I had the RSS updated, but it turned out it really wasn’t. pMachine (the current blog package) is sort of a bitch to customize code-wise, so… sorry, folks. You’re just going to have to visit the site to read the whole article for now.

With the new look and feel, I’ve noticed that if I throw a picture in there and align it to the right, sort of like I do in some entries, if the picture is longer than the entry, you get some odd overlapping and such.

I’ve tried to fix it, but IE’s rendering engine just can’t seem to handle the CSS ‘clear: both’ directive correctly. That is, I tried to say “each entry should clear on both sides so you don’t get overlapping entries,” but when I do that, IE loads the page up then the top entry on the page blinks out of existence until you scroll it off the screen, then back on… then after a few seconds, it just blinks out of existence again. Obvious rendering engine bug. (Works on Firefox just fine, though.)

Long and short of it is, I’m not sure if there’s anything I can do about the overlap in a browser-independent fashion (which is what I was hoping to achieve). I’ll keep plugging away at it, but for now, I’ll just have to watch my image sizes. 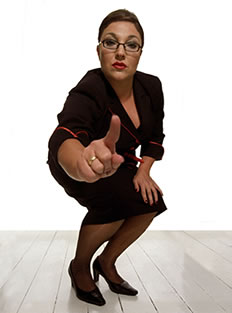 I’ve been watching the show Supernanny a bit lately, it being a total train wreck as far as the ridiculous out-of-control-nature of the kids on the show and whatnot, and over the course of watching I realized something:

I can’t really quantify what it is, but there’s something about Jo Frost that is just hot. I’m gonna have to take that one to the psychologist, aren’t I? I’m sure Freud would be having a ball with me.