I’m having a hell of a time with the electronics at my house lately.

Jenn’s iPod has been having trouble syncing with the latest iTunes. Last Tuesday my Xbox gave me the Red Ring of Death. This weekend, my DVD player stopped reading discs and I encountered this awesome Windows Update issue where it pegs the processor at 100% for an indeterminate amount of time. Oh, and I think the connections for the center channel and the left rear channel on my receiver are going wonky.

I’m starting to wonder if I’m coming upon that time where all of the warranties are failing or something - sort of like the seven minute conversation lull, but for electronics warranties.

There are a couple of positives to this, actually.

First, I picked up one of those DVD/VCR combos where the DVD is a recorder and can dub from VHS. (It also does high-def upconversion on both the DVD and VCR.) This is really cool because it allows me to take some of the videotapes we have of home movies and out-of-print stuff and convert to DVD. Tried it with my copy of The Maxx and it worked like a mad bandit. It also means one set of cables for two components - no longer do I need separate TV or receiver inputs for the DVD and the VCR. Very cool.

Second, it’s giving me an opportunity to re-evaluate a lot of things. How the home theater is put together, for example. I have a lot of interesting ideas we can put into place by reorganizing things and moving older components that don’t get a lot of use to other rooms (the CD player can move to a different room because we don’t use it much and the DVD player can play CDs). I’m also looking at how much time we really spent with the Xbox, and it’s a lot. While that thing is busted, I’ve played my other consoles, read books, put puzzles together, watched movies I’ve been wanting to watch for a while… It’s sort of crazy how it’s become such a central part of what I do in the evenings and it makes me wonder if that’s really how it is or if I just get lazy after playing for a bit and could actually do all these other things even with the Xbox around.

Xbox Support should be sending me a box to return my Xbox for repairs sometime this week, hopefully by Wednesday. It’ll be up to 10 business days before they send it back, then up to another five business days for it to arrive, so we’re looking at nearly three weeks. Better make the most of it!

Of course, it does sort of put a damper on some of my media center plans, since I can’t very well set up a media center connected to an Xbox without an Xbox.

Speaking of media center stuff, we were wandering around the mall this weekend and meandered past the Apple store. They had some Apple TVs on display and I showed Jenn how you could navigate around and listen to your music and such that you get from iTunes. (Unfortunately, it doesn’t really do all the stuff I need it to, so it’s not an option, though a well-configured Mac Mini might fit the bill. Anyway, I digress).

As we were looking at it, poking through the menus, Jenn turned and asked, “Is this is what you want to do with our movies?”

“Yes,” I said. “I want to be able to navigate through, see the cover art, select a movie to watch, and watch it, all without having to search through the binders full of DVDs. This, right here, is precisely what I’ve been trying to do.”

Breakthrough! I admit it was sort of hard to see the full effect when I showed her during my test run with Windows XP Media Center in a virtual machine over a wireless network, but I guess I assumed she was still getting the idea. Apparently not, but now she gets it and is on board. 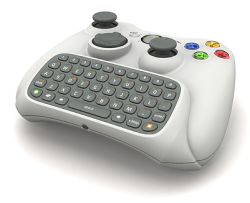