Even using Akismet for anti-blog-spam (which seems to work pretty well), I’ve noticed that as far as trackbacks/pingbacks are concerned, I only get two types:

So I’ve disabled trackbacks because they’re just a pain in my ass to moderate.  If anyone can provide a decent argument why I should re-enable them, I’m all ears.  Comment away.  (Comments are still enabled.) 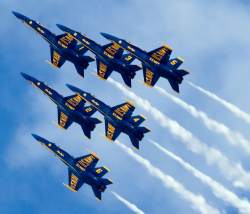 The Oregon International Air Show was this past weekend and it was pretty cool.  Since Jenn and I live near the airport, we get a pretty decent view of the show just by sitting on our front porch, so we popped some chairs out there and watched the Blue Angels literally fly down our street.  (The photo is from the Blue Angels web site, but the view looks almost identical from our house.)

After the air show, since we were outside anyway, we decided to do some much-needed garage cleaning.  We “inherited” a lot of stuff when we moved into our house because my parents moved into a condo about the same time.  Stuff like two big boxes of slug and snail bait.  Bottles and cans of substances I don’t think they’ve actually manufactured in my lifetime.  Time to get rid of it.  So we gathered all of that stuff up into a couple of boxes and prepared it to go to the chemical disposal facility.  (Gotta dispose of that stuff in a safe manner!)

Oh, and I can’t remember the last time I used a hand saw, but somehow I have three.  Fine, I’ll keep one, but the other two went to the Goodwill donation truck along with the four spare hose nozzles and other redundant implements.

We also made a Home Depot run to get some boxes and such to better organize the things we decided to keep.  Net result - we’ve reclaimed the garage.  You can swim in the space in there.  We didn’t even get through all of it, either - I can see where we can do some additional optimization and reclaim even more of the space in there.

Why?  We’ve been wanting to get bikes for some time now, but the garage has been so jam-packed there was nowhere to put them.  Now that we’ve reduced the amount of crap in there, I can see some storage opportunities for those babies.  You know when the last time I rode a bike was?  Neither do I.  It’s time to get back out there.

Oh, before I forget - Sunday we went to see The Bourne Ultimatum with a couple of Jenn’s friends, Angela and Keaka (cool people).  We left during the Sunday showing of the Blue Angels, figuring we’d beat the traffic.  Not so - traffic was worse than ever.  Why? The ridiculous freeloading morons who decided to park along the side of the road so they could watch the show.  It wasn’t just a few cars - there were so many cars lined up on the freeway it was like they had pulled over for an emergency vehicle and just decided not to drive again.  Motorhomes pulled off into fields adjacent to the freeway and dropped anchor.  Cars lined up like it was a drive-in movie, pulling off the road with their rear ends in the ditch.

Now, I’m glad that they pulled off the road rather than trying to drive and watch at the same time.  (We passed a totalled car that was pretty obviously the result of the driver trying to watch and drive at the same time.)  But I feel pretty strongly that if you’re going to watch the show, maybe you should go pay your $20 and support the show.  I realize it sounds sort of hypocritical considering I parked my butt out on my front porch, but then, the airport has a noise easement over my house for this sort of thing, so I kind of feel like my property taxes already go to support these things.  My house is the one the pilot’s going to crash into if he goes down.  You people parking on the side of the freeway?  You were on the way to the store and decided to get a free show.  That’s bullshit.  Either keep driving or go get a ticket, you freeloader.

If You're Gonna Blare Music, Make Sure It's Good Music

Coming out of the grocery store yesterday, I swore I heard an ice cream truck.

It started quiet, sort of peaceful, like that background music you hear sitting outside a decent coffee shop.  Second by second, it got louder.  And louder.

Looking around, I saw this car come tearing into the parking lot.  Tires squealing, careening around other cars, totally unsafe style, and coming this way.

At this point, the music was so loud it was like I was listening to my own headphones.  It had changed, though, from ice cream truck music a la The Entertainer to something more lilting, bringing visions of castles and ponies and princesses to mind.  Like Zamfir, but with more birds chirping and crap.

The car screeched into a parking spot and the driver stepped out, the music immediately silenced as the car turned off.  The driver, acting far more important than I’m sure he’ll ever be, strutted into the store.

I’m not a big fan of those cars that crank their music up to share with the neighborhood, but I mind it a little less if it’s at least halfway decent music.  I’d even take some ridiculous hardcore gangster rap over this fluffy-pink-clouds garbage.  If you’re gonna blare music, at least make sure you’re blaring good music.

Convert A Batch File or VBScript to EXE

There is so much stuff out there that I have no idea exists.  Anyone else know that there’s a program that come with Windows called “IEXPRESS.EXE” that basically makes installers?  Anyone know you could use this thing to convert a .BAT or .VBS to an .EXE?

Yeah, neither did I. 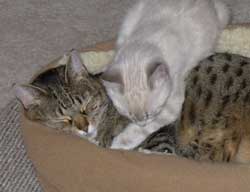