I went in on Saturday for my sixth laser hair removal treatment on my face. Just like last time, I went with the MedioStar laser on the entire face (with the exception of the areas immediately around my lips, which is still a little too harsh).

While amazingly intense, the pain was actually less than it was last time. You can tell that as the hair thins out there is way less pain. In some areas where the hair is super thin, you can barely even feel it. That’s not to say it didn’t hurt, but I didn’t sweat through my shirt this time.

Treatments at the facility I’m with are sold in blocks of six. (That number strikes me as sort of arbitrary, but I’m sure there’s some logic to it.) I ended up getting another set of six so I can finish this thing up. I’m really getting excited with this latest progress. I haven’t torn up any sheets or pillowcases in the last couple of months (yes, one day of growth would be enough to cause destruction to anything my face came in contact with, which is one of many reasons I’m doing this).

Once it’s done, my understanding is that you still have to get “maintenance” done because as new hair follicles awaken in your skin, you can get little patches showing up. That’s a lot less of a problem, particularly since the cost of the maintenance treatments is less than a third of what the initial treatments cost and, with the hair pretty much gone, the pain really won’t be there.

Designing for Testability with TypeMock

Design for testability vs. API as a deliverable (or test-what’s-designed) is something I’ve blogged about before and it does sort of boil down to a religious debate. I’m currently on the “test what’s designed” side because, for me, API is a deliverable. I’m also not a big fan of some of the sacrifices you have to make when you design for testability, like losing your encapsulation.

Regardless of your views, mocking is still something you can most likely take advantage of in your unit tests. You could use one of the open source frameworks out there like Rhino.Mocks. It’ll work. If you have access to TypeMock, though, or if your project already has TypeMock in it, there’s no need to move away from it or be scared that it’s “too powerful.”

You can still design for testability using TypeMock. You just need to follow one simple rule:

Restrict your TypeMock use to “Natural” mocks.

That’s it. That’s the secret. As long as you stick to the TypeMock RecorderManager and RecordExpectations objects when setting your mocks up, only using “Natural” mocks, you can still satisfy your design-for-testability urges.

And, hey, it doesn’t hurt that you’ll be able to do those more powerful things should you need to, right?

Why NAnt Is Better Than MSBuild

I’ve been writing a lot of build scripts and custom build tasks in both NAnt and MSBuild lately and, based on this experience, I’ve decided I like NAnt a lot more than MSBuild. Here’s why:

I mean, I get the whole “side-effect free” concept behind “isolating” the MSBuild tasks and everything, but it seems like NAnt is so vastly more flexible without it. Is there something I’m missing? Some development philosophy they had when coming up with MSBuild that will put all this into perspective and make me see why MSBuild is so much better? Or am I right? Does NAnt really whip MSBuild’s behind in almost every area?

The Cake Is A Lie

I am, I’m sure, somewhere around the last person to get on board with this, but still. I got The Orange Box for Xbox 360 for Christmas and, after hearing about Portal from a lot of folks, I finally got a chance to play it this weekend.

I’d played Half-Life before, and Counter-Strike, and all that, but this is way, way different. Basically, it’s a first-person puzzle game, which is something I’d never come across before. 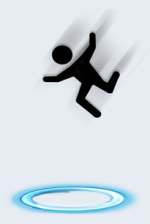 The idea is that you are in a testing facility for a company called “Aperture Science.” You’ve got a gun that shoots, basically, “holes.” You shoot a wall, and a hole appears. Then you shoot a different wall and the other side of the hole appears. Walk through one hole, you come out the other.

You use your portal gun to solve puzzles in the testing facility getting from the entry to the exit of each room. As you progress, you learn more and more about the testers and Aperture Science. And then… well, you just have to play. It’s the perfect blend of difficulty, humor, fun, and originality. (The subject of the post is a reference to one of the little jokes in the game.) Plus, the song at the end credits is probably the best video game song ever.

The only problem I had with it was that it was too short. I beat the standard game in like four hours or something. After you beat it, there are challenges you unlock (advanced versions of the puzzles you just solved, challenges to see if you can beat the puzzles in a certain time limit or with a minimum number of portals, etc.), but I want more story. It was short and fantastic and I gotta have more.

When I was setting up multi-user iTunes on my new Windows Vista box, I also came across the need to set up Picasa for multi-user support. Like iTunes, Picasa is really a single-user application so you have to do some special work to get it to share a single library across different user accounts.

Fortunately, you can use many of the same principles as in multi-user iTunes to get Picasa up and running without much issue. (Enough so that I can do some pretty easy copy/paste modification to the iTunes instructions and get Picasa instructions.)

Now… here’s how to get it running:

I’ve had this running for a couple of weeks now and haven’t had any issues. The toughest part really is doing the backup/restore to move your pictures to a new location that everyone can access. Just be patient with it and be willing to spend the time it takes to try it a few times. Oh, and be sure to back things up and verify your changes take hold before you delete things. You’ll get it. It’s not that bad.

All instructions here are provided for your UNSUPPORTED use and AT YOUR OWN RISK.