One Week in Disney World

I live on the west coast of the US so while I’d been to Disneyland in California a few times, I hadn’t been to Disney World. We decided this year was the time to take that trip.

We stayed at Kidani Village, which is a resort in the Animal Kingdom portion of Disney World. It was pretty cool because outside the room (well, air-gapped, so your room, then a fence, then some space, then another fence) are animals like zebras, ostriches, and ankole cattle. Depending on the room, there may be giraffes and other animals.

The first thing that struck me about Disney World is the sheer scale. It’s 44 square miles all told - the resorts, the parks, everything. That means everything in general is big. It was a quarter mile between the lobby and our room. At the end of a tired day, that’s a full five minute walk.

I filmed the walk. Watch it and be amazed.

The first day was a travel day. It’s about five and a half hours to fly from one side of the US to the other. We basically landed, went to dinner, and crashed.

The second day was spent in Hollywood Studios. This is roughly equivalent to California Adventure by Disneyland. The majority of the day was spent in Black Spire Outpost, the Star Wars section of the park.

I could spend a whole day in Black Spire Outpost. The whole thing is so immersive, so well done. If you are a Star Wars fan at all, this is the coolest thing ever. The cast members there are in character, stormtroopers randomly patrol the streets, sometimes Chewbacca just walks by. At night it’s lit up and is gorgeous. You can look around and you’d never know you were in a Disney park.

We pretty much bought everything they sold here. Take my credits! We built a lightsaber, we built a custom droid, we adopted a pet, we bought literally every drink they sold in the cantina. We had the blue milk with and without alcohol.

I would say the “can’t miss” items here are flying the Falcon and building the lightsaber.

The Falcon flight is sort of short but is super fun, something any Star Wars fan has wanted to do forever. There’s a photo op area inside where you can take your picture at the chess table.

The ride is actually responsive to the controls, like a video game, not just a ride on rails. You have to work as a four-person team to capture some cargo. One pilot controls left/right, one controls up/down. There’s a gunner to take care of incoming bad guys and an engineer who is in charge of nabbing the cargo from a moving ship.

Building a lightsaber is… it’s like participating in a live action version of a scene from Star Wars. It takes place in “Savi’s Workshop,” where some “junk gatherers” guide you through the process of building a custom lightsaber. 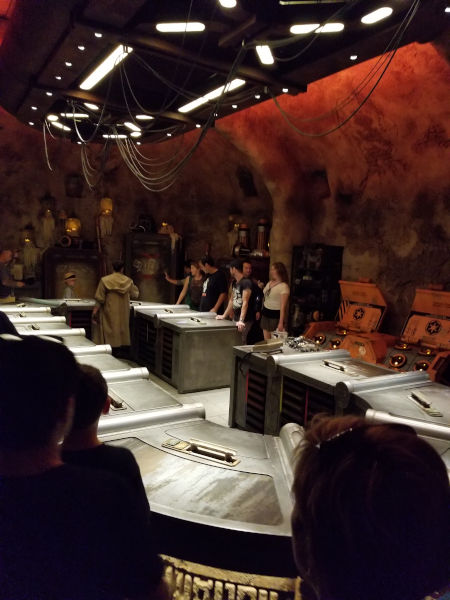 The cast members there give you a speech about the various Jedi who carried the different saber colors and what each color conveys. The whole speech is timed to this background music that plays like a soundtrack and changes with the mood. As they talk about each color, the lights in the room change to reflect it. Voices of the Jedi speak like ghosts from beyond.

The build itself is fairly straightforward but you probably won’t be prepared for how heavy the saber hilt is. It’s like two pounds. It’s solid metal around a plastic holder that handles the electronics.

The kyber crystal you put in the saber is also interesting. It controls both the color of the blade as well as the sounds the saber makes when it moves, turns on, and turns off. You can get different crystals at the shop (naturally) and if you swap them into your lightsaber it will change the colors and sounds - it’s not that you need a different blade or anything.

Further, you can get these little boxes called “holocrons” where you can put a crystal into the box and it’ll glow the color of the crystal and share “stored knowledge” (recorded lines from various movie characters) associated with the crystal.

Anyway, do the Millennium Falcon flight and make a lightsaber. It’s sweet.

Jenn pried me away from Star Wars land for a little at the end of that day and we rode some of the Pixar rides. Slinky Dog Dash is a pretty good little coaster.

That night we went to the “Jingle Bell Jingle BAM!” dessert party, which was basically an all-you-can-eat dessert bar with some interesting holiday treats, a meet-and-greet with Chip and Dale, and front row seats for a really cool music and light show. It was super fun and even after a whole day of walking, Phoenix was dancing through the show.

The second day was spent at Animal Kingdom. I liked this a lot more than I thought I would. There’s a safari style ride where they drive you around through a preserve and you can see the animals there. It reminds me a lot of Wildlife Safari in southern Oregon. Really fun, really interesting.

The “Expedition Everest” ride here is pretty fun, a decent roller coaster. I’d recommend hitting this one if you get there.

We didn’t get to see a lot of the shows, but we did find Kevin from Up! running around the park and dancing to bands playing in various areas.

We hit the trifecta. It was so packed. Like SO SO SO PACKED. People were just there getting trashed and we’re not the only ones who noticed. I heard rumor that there was a fight amongst the drunks.

It doesn’t help that most of the “foodie food” isn’t palatable to the eight-year-old set, so finding “regular kid food” which consists of chicken tenders, cheese pizza, or some similar bland-yet-kid-standard fare is a lot of walking.

We spent the majority of the time either looking for kid-friendly food [which didn’t require standing in an hour-or-more line] or hanging in the other area of the park where “Mission Space” and “Spaceship Earth” are. We did enjoy these rides but I’d like to go back and see the countries at Epcot when there aren’t a bunch of people trashing it up.

Days four and five were Magic Kingdom. This is basically the same as original Disneyland. Most of the rides are the same. There are a couple of rides Disneyland doesn’t have, like the Peoplemover and the Carousel of Progress. Some rides are slightly different, too, like “It’s a Small World” and the Haunted Mansion are both just a little different.

The one thing I’ll focus on is the tiki room. I love the Enchanted Tiki Room. We go to Disneyland, I look forward to grabbing a Dole Whip and heading into a kitschy show of 50’s audio-animatronic birds. It makes my heart smile. They changed the show in Disney World so it doesn’t have the fountain in the middle and the birds seem different, not as retro or cartoon looking. It wasn’t the same and I was disappointed.

We did attend the Very Merry Holiday Party and that was really cool. The Magic Kingdom park closes to the public at 6:00 PM for these and guests with party tickets can stay until midnight. They have stands handing out cookies, hot cocoa, and cider. Rides change to holiday themes like “Jingle Cruise.” Space Mountain lights and music all switch to holiday music. It’s insane and awesome.

The last day was a half day at Hollywood Studios where we saw the rides we didn’t see the first time around. The Tower of Terror is my all-time favorite ride, so I’m glad we got to ride it again. (I’m sort of sad they changed the one in California to be Guardians of the Galaxy theme.) We also saw the Aerosmith “Rock n Roller Coaster” which was a great ride, too.

The remainder of that last day was travel back home. Another long flight.

In all, this was a great vacation. It was worth doing once, and I’d love to go back in the future to see more of Animal Kingdom and Epcot. In the meantime, I definitely need another Star Wars hit and original Disneyland in California will be much more affordable for me on my side of the country.

Also, it wouldn’t have happened if Jenn hadn’t planned the whole thing and watched altogether too many YouTube videos on where to eat, where to stay, how to take advantage of all the deals, and so on. She’s amazing and both Phoe and I owe her a debt for all the work she put into it.

Finally, if you want to see a walkthrough of how much Disney got us for, here’s an overview of all the stuff we got.