Using a Headphone Amp: Worth It?

I listen to a lot of music at work and thought it’d be nice to have a decent setup for that. I’m not what you’d refer to as an “audiophile” so much, but I have an opinion and I know what I think sounds good vs. what I think doesn’t sound good.

Listening to low-bandwidth streaming audio off my phone with $10 Bluetooth headphones is not good.

My first step was getting some decent headphones. Not being, as I said, an audiophile, I went with some good-bang-for-the-buck Sony MDR7506 over the ear headphones.

That was a definite improvement, but then I started looking at amps.

Headphone amps are expensive. Wow. In my opinion, most times it’s unjustifiably expensive like when you see the $1000 HDMI cable that you know won’t outperform the $6 version.

Anyway, I started looking at these things and realized… I need to take it a little slower. I’m not interested in dropping $100 on something I don’t know is going to make a difference. But I could dip my toe in the pool for, say, under $50 and see what the fuss is about, and if I really do like it maybe step up at some later time.

I picked up a DIY 6J1 tube preamp kit for $15 off wish.com both as a step toward this and as a fun little project. I like putting stuff together and I figured, why not? To be clear, I know this isn’t a super high-quality deal, but it’s at the right price point and will at least tell me if I like it.

Anyway, this particular preamp is said to “make the sound more warm.” It doesn’t help the volume, it’s more like it just changes the sound coming in. Sooo….

I also got a Behringer HA400 amplifier. That’s the thing that will help with the volume.

All put together, here’s the whole setup: 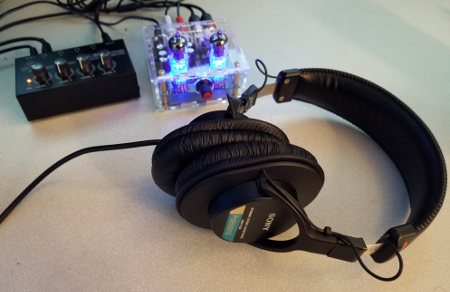 My audio source (phone, iPod, whatever) runs into the 6J1 preamp, then into the HA400 amp, then to the headphones.

I listened to a few different songs, somewhat arbitrarily chosen yet representative of the sort of thing I listen to more often than not:

I listened to others throughout the day, these are just ones I started with and tried A/B testing with.

I think I’d like to try one of these more expensive all-in-one units where the preamp and amp are all in the same box, but I’ll admit I’d go in a bit biased. I paid about $40 for my setup and it sounds good enough for me. I can’t imagine the difference in sound would be enough to justify $100 or more.