Phoenix is really into the Fisher Price “Little People” figures, particularly the DC Super Friends line. She doesn’t know a lot of words, but she knows “Bapmo!” (Batman) and loves flying them around the room.

A while ago we got her the Batcave playset so she’d have some additional vehicles and stuff, not just figures. This, of course, led to also getting Wonder Woman’s invisible jet and the Batmobile. (OK, maybe it doesn’t hurt that we both like the Super Friends. Come on, when your 18-month-old runs around yelling about Batman, that’s pretty sweet.)

The proliferation of Super-Friends-related items started lending itself to a bit of a storage dilemma, and on top of that, I started thinking back to the cartoons… How can you have the Super Friends without the Hall of Justice? 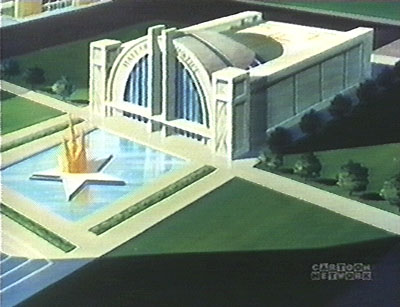 So I took a cardboard box, went to the craft store and picked up some supplies… and I present to you: The Little People Hall of Justice! 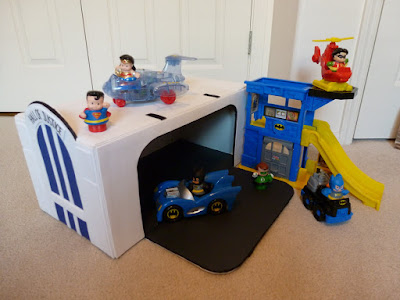 The main form is just a cardboard box. The outside is covered in a thin white foam that makes it soft. I lined the inside with tagboard and added a fold-down flap that Velcros shut so you can play inside. The windows on the front are blue tagboard behind some cutouts in the foam. The edges of the cardboard are lined with twill tape to avoid any cardboard cuts. I reinforced the top with additional cardboard so it’s not quite climb-proof, but it should stand up to some reasonable amount of abuse.

I posted several views of it in the photo album if you’re interested. The pictures have captions that explain how things are put together… in case you want to make your own.