Had a bit of a home improvement weekend.

We have these water fountains for the cats - one upstairs, one downstairs. We noticed that the one upstairs was getting filled a lot more often over the course of a week than it had been and figured it was just that the cats were more thirsty or something. No, turns out the fountain was leaking.

The short version is that the carpet was a bit wet and everything was generally OK except for the baseboards near the fountain, which had expanded (yay, pressboard!) and were basically water damaged so we had to replace them.

If you have to replace your baseboards in your house, just assume that Home Depot and Lowes will not have the exact type you have installed. They just won’t. I don’t care if you bought it there last week, that trim is now out of style and you’ll get something really close to what you had, but it won’t be exact. This will cause you to have to replace a bigger section than you really wanted to because they have to match. If you are unlucky, this means the entire room. (We were lucky and only had to replace a small corner by the door.)

Over the course of last week I got the new baseboard painted and got all the tools ready for the weekend job. Saturday my dad came over and showed me how to use the complex miter saw that I inherited a while ago but have basically ignored since I got it. Learning! Anyway, with his help we got the new section up and it looks like new. Actually, slightly better than new because the replacement I bought was the same pattern but a bit thicker and better quality than the baseboards originally in the room.

Of course, neither of us are professionals at this so replacing like four feet of baseboards took something like three hours. No cursing or drinking was involved/required, though. It went smoothly.

After that, my dad and I took a break and played the last few levels of Gears of War 2 on co-op, which was fun, while Jenn and my mom went shopping. 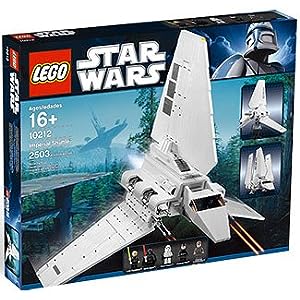 Sunday, other than the little chores that need to get done because you’re lazy about them all week, I finally got the opportunity to sit down with my new Lego set that I got thanks to the tax return. It’s a big 2503-piece behemoth Star Wars ship. (My favorite ship, in fact, from the Star Wars universe, which is why I bought it.) Phillips Double Chocolate Porter, my recently-acquired Reboot DVDs, and Legos. That’s a recipe for a nice afternoon, right there.

The Lego set has four separate instruction manuals. I only really got through the first 2/3 of the first manual in a couple of hours, so it looks like this will be a long project, which is fine. I like building Legos. It’s like putting together a super cool 3D puzzle. I’m recording it with our video camera so I can make a time-lapse video of the construction.

Slightly related: At the same time I bought the new baseboards, I also bought the crown moulding for the bathroom that we painted back in 2004. At the time we totally intended to put up crown moulding and then somehow it never happened. We didn’t have a saw, we didn’t have time, we didn’t have inclination. Well, now that I have the saw, I know how to use it, and I’m already in that DIY mode, I figure it’s time. I’ve got the boards, they’re painted, they just need to be cut and put up.