This Thanksgiving we were given a little something extra to be thankful for when my daughter, Phoenix Aeralynn Illig, was born. At the time of birth she weighed 6lb 14oz and was 20.5” long. 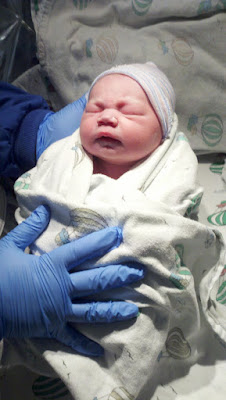 Birth was by Caesarian section. Mom and baby are both fine, though mom’s going through a bit of recovery from the C-section incisions.

I have learned a lot already, just five days into being a father. Granted, my experiences are not the same as everyone else’s, but my personal findings so far:

First, the baby doesn’t arrive like it does in the movies. Which is to say, there’s not a huge panicking “holy crap my water broke” moment, nor is there really the mad scramble to find the bag for the hospital and all that. I woke up around 4:30a on Thanksgiving with Jenn tapping me on the shoulder saying it was time to go to the hospital, but basically it was pretty calm. I think it took us like an hour to get our stuff together and get to the hospital, and it was still no real “rush.” I’m OK with that; we learned a similar thing at our wedding, which also wasn’t the “everything is falling apart” panic you see on TV.

Second, babies sleep a lot. People complain about these horrendous sleepless nights, and while, sure, I’ve lost a little sleep, it’s not like I’m up every 15 minutes or something.

Third, the signs for what the baby wants are generally pretty obvious. Baby makes sucking/eating motions and then starts crying: hungry. Baby crying for no reason suddenly: change diaper. Um… really that’s it. Otherwise she’s a pretty happy baby. For us, “why is the baby crying?” generally amounts to “hungry.” If she’s tired, she just goes to sleep, so there’s no real “crying because I’m tired” thing going on.

Having a C-section pretty much destroys you. Jenn, a total trooper, is pretty well laid up and on pain meds because the C-section still hurts (not the incision, but something “up in there”). That means, basically, that I went into the hospital with a wife and came out with two babies. I have a pedometer I carry around and I’ve well exceeded the target number of steps for the last week running around and being a single mom for two kids. Basically.

The cats don’t care about the kid. I thought they’d freak out when she cried or whatever, but they really don’t care. One cat in particular, Stan, seems to be really concerned if she cries and checks up on her through the day. We’ve taken to calling Phoenix “Stan’s baby” because of this. 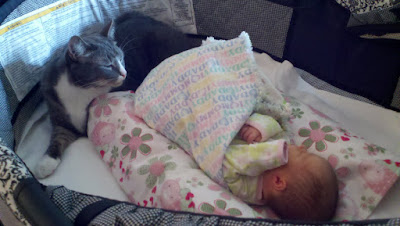 (Yes, we’re very careful with the cats around the baby. If they come near, they are under direct and constant supervision. Fear not.)

Communication is harder to maintain than the people not having the baby think. This is actually what keeps me busy the most. Not the baby, not the running around, but the communication.

During the birth I was in a sterile operating environment so I couldn’t get to my phone. Of course, it was going off with text messages the whole time (phone on vibrate), people wanting to know what was going on. When I got kicked out (they didn’t let me stay for the C-section because Jenn went under general anesthesia) I was in this sterile room in the center of the hospital with what equates to about half a bar of signal. Sending messages just didn’t work. And, of course, because I couldn’t instantly return messages (or the messages I was returning were getting hung up in the network) people assumed the worst and sent more messages.

Just after the baby was born and for the next couple days, Jenn’s phone, my phone, the home phone, emails, IMs, Facebook messages, etc., went off non-stop like a central switchboard. People “just checking in,” offering support, curious how things are, asking for pictures, etc. Problem being, we hadn’t actually been released yet because of Jenn’s C-section, which meant me trying to single-handedly address all the incoming requests for information, PR style. Why aren’t there pictures? Because they’re all on the camera and I don’t have a computer at the hospital to get them off the camera, sorry.

The thing is, I don’t think folks realize that “just one text message” isn’t so bad, but if there are like 30 people all sending “just one message” and freaking out or sending more messages when the first one wasn’t acknowledged quickly, it becomes a tidal wave of messages.

It’s become more manageable now, but we still get a pretty constant influx of people curious “what’s up” or how things are going. I love, thank, and appreciate all of the requests, truly. I feel blessed that we have so many wonderful friends and family members. You never really do know how many people care about you until big life events like this, and it definitely makes you thankful when that time comes. It’s just… if I can’t get right back to you, or if you don’t hear anything immediately, please don’t instantly assume the worst and send another ping. I’m just one guy, and there are just 24 hours in the day, and I’m kinda still getting the hang of all this. I’m probably out running around to the bajillion follow-up appointments (see above). If there’s something to know, or if there’s something I need, I promise to make it known. If there’s something cute to see, I will post a picture somewhere you can see it. And, again, thank you kindly for all the generosity.

Plus, if you really want to help, I have laundry, dusting, vacuuming, and all the usual house chores that aren’t baby related still to do… I can hook you up with all that since it’s the bulk of the work. :)

Finally, having a baby is totally surreal. I don’t think the whole “being a dad” thing has hit me. I mean, I still sit and eat dinner with Jenn and say, “Dude, we’re married. That is so weird.” Not that I think being married is weird, just that I’m a part of that, and looking in at myself as part of that is still more a TV/movie type of experience than something that happens to real people in real life. Looking at this now six-day-old baby and thinking, “This little being is a part of me and a part of Jenn… and someday she’ll be an adult, too, and pursue her own course,” it’s just… really surreal. It’s hard for me to wrap my mind around. It’s going to take some time to “click.”

Anyway, that’s what I’ve learned so far. Like I said, YMMV since my experiences are my own.

If you want to see more pictures, I posted a full gallery. 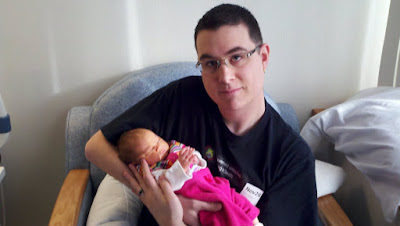 From 2010 Birth of Phoenix Aeralynn Illig