At Least Go Somewhere Close to the Speed Limit

It’s been a while since my last traffic-related posting, mostly because my commute in recent years has been pretty short so I don’t have those “Traffic Asshole of the Week” moments to post. Today, though, I found THIS guy: 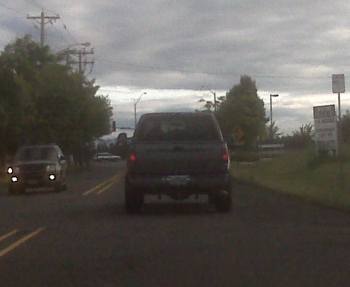 This giant GMC truck made my traffic day. If you, too, want to make my day in the same way, here’s how:

After I finally got around him (where there were finally two lanes), I looked in my rear view mirror and saw cars passing him in one lane like he was standing still… and somewhere over 10 or 15 cars piled up behind him, waiting for a chance to jam into the next lane and get around.

Dude, you are the single-handed reason for traffic. Pull over to the side of the road, take the keys out of the ignition, and throw them as hard as you can into the scrub. Walk home. You are fired as a driver.