The Great Receiver Install of '10

This weekend I took Saturday from about 11:00a to 7:00p installing and configuring my new Onkyo TX-NR3007 receiver.

This replaces a Yamaha receiver I had from probably 10 years ago from The Good Guys (a now-defunct consumer electronics store that used to be everywhere locally). The primary driver for the upgrade is that I have a Bose Acoustimass 16 speaker kit that will support 6.1 surround, but the Yamaha receiver only has 5.1 outputs… so there’s a speaker that’s been sitting idle in a cabinet for a few years, yearning to break free. This Onkyo supports 9.2 surround, so plenty of room to upgrade.

I compared several options before settling on this particular receiver. My initial criteria:

I started looking at models from Denon, Onkyo, Yamaha, and Pioneer, but quickly came down to Denon vs. Onkyo. From there, I compared:

All of those have at least 5 HDMI inputs and 7.1 surround, and all are in the price range.

I ruled out the AVR-2310CI based on the fact it was the only one that didn’t have network connectivity and all the others did - I have a lot of music on my Windows Home Server and I want to have access to it if possible. I ruled out the TX-NR807 based on the very few component inputs, lack of discrete channel inputs, and no USB port. So the lower-end items in the list got ruled out.

I then started looking at the expandability of the speakers and ruled out the AVR-3310CI and AVR-4310CI. Both of those are 7.1 outputs while the remaining Onkyo units have 9.2 surround and the AVR-4810CI has 9.3.

After that, it was a bang-for-the-buck comparison. The remaining contenders price out like this (roughly):

Again, that’s rough pricing - you can find sales and such that’ll save you a couple hundred, give or take, but that’s around the average price I saw.

The Denon, then, was well beyond the pricing of the Onkyos. Like, double. I can’t justify that much price difference, especially given my original budget constraints, even if the brand is potentially more reliable.

So: the Onkyo TX-NR3007. I got a screamin’ deal on it through some friends (big thanks to them) which got me the receiver and the three-year warranty for $1400. (Yes, I got the warranty. I’ve had the warranty save me on electronics purchases twice now, so pretty much anything over $750 I’ll consider getting it. Did you know that geomagnetic forces affect large-tube TVs?)

Anyway, thanks to Alex Scoble for helping me figure some of the receiver stuff out. That guy is an A/V king. 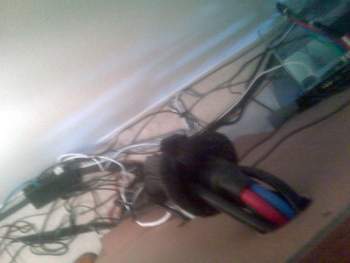 Since I was able to use HDMI to connect audio and video at the same time (my old Yamaha receiver only had audio inputs), I had to tear out pretty much all the wiring I had so I could rewire using HDMI. That’s actually what took me all day - the rewiring effort. I’m pretty anal about my cable management, so when all is said and done, it’s nicely bundled using velcro ties and cable wraps. But that also means it’s a pain in the ass to take apart if you’re redoing the whole system, so… much un-velcro-ing ensued. This picture to the right is of some of the wiring as I was in the process of ripping things out. Painful.

After slotting that 65-pound beast into place, it was a matter of connecting everything up. There are a lot of inputs on the back, so this was mostly just trying to figure out which one(s) to use. Luckily, it turns out they’re all totally assignable, so you can say “The ‘CABLE/SATELLITE’ input really corresponds to HDMI input 3.” 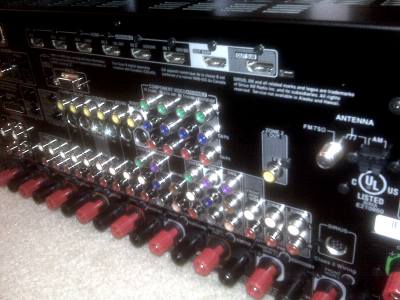 And the final step, before strapping all the wires back down, was to test out the various components and make sure everything was connected correctly. I had a minor issue in that the HDMI inputs are numbered right-to-left instead of left-to-right, so what I thought I had plugged into HDMI input 1 was actually in HDMI input 7 (and so forth), but that was easy enough to straighten out. Chalk it up to me not paying close enough attention.

I got all the cables strapped down, pushed it all into place, ran the Audyssey MultEQ auto configuration utility, and watched me a little TV! 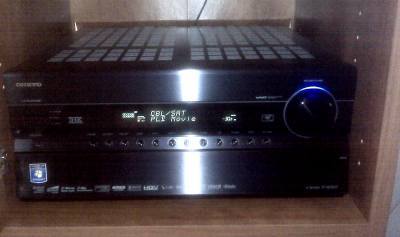 We also tried out some of the cool internet features, like listening to vTuner radio (free through this receiver) from around the world and logging into Pandora and listening/rating tracks right through the receiver. My sister and brother-in-law are living in Malta right now so we listened to some Maltese radio just to hear what they’re listening to. Very neat! It also detected my Asset UPnP installation on my Windows Home Server and I was able to browse and play my music library right through the receiver. (I did have to switch Asset to stream using WAV rather than LPCM, but WAV seems to work for both PS3 and the receiver.)

In playing some games and watching some movies, I found that my previous configuration had the rear surround turned down way too low and things were just not balanced as well as I thought. The surround after the Audyssey MultEQ configuration is much richer and more defined. I did notice that I had to mess with some of the “listening modes” to find the best one for standard stereo TV content and stereo streaming Netflix over Xbox 360, but the “THX Games” mode for Xbox 360/Dolby Digital games is really sweet and had Left4Dead 2 sounding phenomenal.

I was surprised at how cool the receiver runs. I figured this behemoth would run hot, but it’s actually not too bad. Warm, but not hot. I’m sure the big ol’ flap I cut for the cables in the back of the cabinet helps to keep the air circulating. Might have to consider doing that for the PS3, which sounds like a damn jet engine all the time it runs so hot.

Another surprising and cool detail was that my media center PC (running Windows 7) detected the new “display” as “TXNR3007” - it knew the kind of “monitor” it was hooked to. It also knew that the display “supported” several different HD-compatible resolutions, while connecting to the TV all it registered support for was 1920x1080. This allowed me to turn down the resolution a tad (I don’t watch full HD video through the media center) and hopefully save some video processing cycles.

Only negatives I’ve found to the new receiver:

The “click.”It has this “click” noise that it makes as it switches from stereo to surround inputs. For example, if you’re watching HDTV and you’re crusing along great in Dolby Digital, then the local affiliate jams in a standard-def stereo signal, the receiver goes “click” as it switches from processing surround to stereo… then “click” again as it switches back. Not a deal breaker, but I kind of wish it didn’t do that.

Video processing warmup time. Turn on the TV, turn on the receiver, switch to the Xbox input, and turn on the Xbox. You hear the sound of the Xbox starting up, but the video signal takes three-to-five seconds to show up as all the internal signal switching goes on and everything filters through to the TV. Again, not a huge deal, but it was kind of scary the first couple of times as I was caught thinking, “Whooooooa… where the hell is my video?” That said, my TV (Samsung LN52A750) is not entirely blame-free - when a single input switches resolutions, it takes a couple of seconds to reacquire the signal for display. Found that out while messing with my media center PC resolutions.

None of those negatives is a huge issue, but something to be aware of. I don’t think I’d make a different purchasing decision based on them. I like the flexibility, the power, and the price of the unit, so no regrets. As things unfold, like if I find new or interesting things with it, I’ll keep the blog posted.

(I’m actually thinking of starting a wiki site dedicated to my home theater/media center setup - not really “community contribution” like a usual wiki so much as my notes on things I discover, how I set things up, etc., so interested folks can learn from my mistakes. Does that sound interesting to people?)