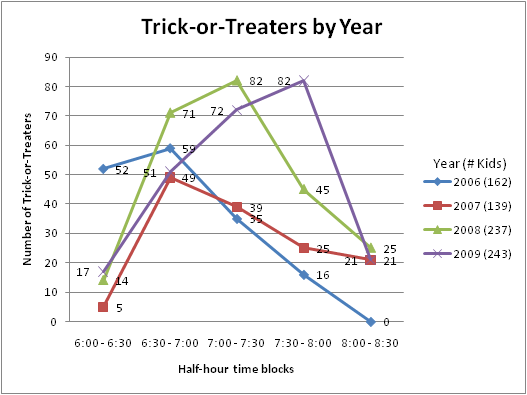 </tr> </thead> </table> Halloween was on a Saturday this year so we prepared for this number of kids by getting two giant bags of candy at Costco. We did think there'd be more, so we have about half a bag of candy left, but at least we didn't run out like we did last year. We put the Halloween projector out again this year and that was nice but I think I want to do more decorating for next year. I think Halloween's on Sunday next year, so I'm not sure if we'll have quite as big of a turnout, but it's fun to decorate and such. Around the 6:30p time we had a couple of larger trick-or-treaters show up in something similar to [Death Eater masks](http://www.amazon.com/gp/product/B000UUMXD2?ie=UTF8&tag=mhsvortex&linkCode=as2&camp=1789&creative=390957&creativeASIN=B000UUMXD2). They were also wearing some pretty heavy long black coats. They didn't say anything (which isn't out of the ordinary) and just held their bags out. Fine, some high school kids doing their last hurrah. When the next group of kids showed up, though, these larger ones were still there. OK, fine, we'll give you a second piece of candy and send you on your way. But they were there for a third time when kids showed up so I told them, no, they'd already been here twice and it was time for them to move on. As I shut the door, one of them stuck a foot in and got up in my face so I started getting ready to get nasty. "You'll be moving that foot now." Then the doorbell rang and they were there again. I'd had it... and then they said "Trick or Treat!" out loud. It was my ***freaking parents***. Man, they got us so good. We had no idea. It was my mom who'd got up in my face because she thought we could see her eyes through the mask. You couldn't - it was total blackout from outside the mask. Wow, did they get us. Not sure we'll be able to get 'em back for that, but we owe them a big one now.
« Manually Uninstalling a Windows Home Server Add-In
Debugging Visual Studio Add-Ins and XmlSerialization Problems »