Before I even get into this, let me preface it by saying Scott’s a friend of mine and he’s a great guy. I told him I was posting this before I did it. It’s just some interesting data that I got in an interesting way and thought folks would be interested. It’s also intended to totally crush Scott’s spirit. (I kid! I kid!)

I was just writing about how I was seeing more and more video blogs and was thinking about the earlier days of Hanselminutes when it seemed like the show was shorter. I wanted to make sure it wasn’t just my mind playing tricks on me so I did some data gathering. This is actually about the process I went through.

The idea: create a graph of the Hanselminutes podcast duration over time so a trendline can be established.

At first I thought it would be pretty straightfoward - I could grab the RSS feed and just parse out the duration info. Turns out they don’t actually list how long each show runs, so I had to change my tack and analyze the MP3 durations directly.

I’m not a Powershell guru but this sounded pretty Powershell-ish to me. The thing is, I already had some tools that would do some of the job for me, so I didn’t write the whole thing in Powershell. It went like this:

Like I said, pretty brute force… but I’m not running this a bunch of times, I’m just doing it once.

Step 2: Getting the Duration from the MP3s.

This was harder than I thought. What you actually have to do for this is get the MP3 tag info and get the duration from that.

I used the open source TagLib# and wrote a tiny console app using SnippetCompiler that looked like this:

Again, could I have done that with Powershell? Sure, but I’m not too strong in Powershell and I haven’t had a chance to get too far beyond pretty basic stuff. And, again, I’m running it once.

So that gets me a tab-delimited text file with the name of the MP3 file and the duration.

This was a simple import into Excel and add a graph. I won’t go through that. 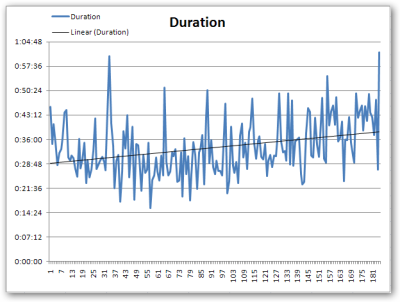 I was right - there is an upward trend in the Hanselminutes duration.

UPDATE: If you want the data for your own enjoyment, here you go.

« COMPLUS_Version and the .NET Framework Runtime
The Problem with Video Blogs »