I ended up getting a copy of Zuma’s Revenge, the sequel to the original game that sucked both Jenn and I in so bad on PC and, later, on Xbox Live Arcade.

The premise of the original game is that you’re a little frog who sits in the middle of the screen. A line of colored balls scrolls in from off-screen along a path. As they scroll in, you can spit additional balls into the line to form chains of three or more, making them disappear. If the line gets too long, you lose. Here’s a screen from the original Zuma: 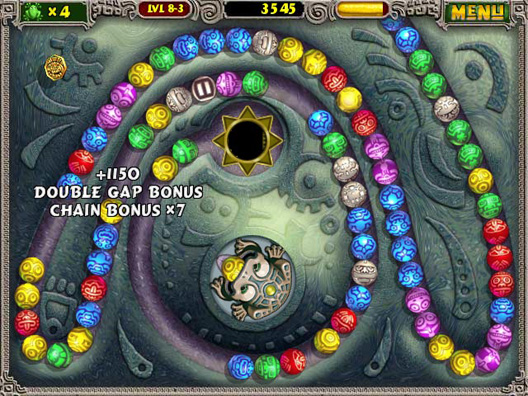 It’s surprisingly addictive and fun. Fortunately, you get that and more with the sequel.

This time, they add new features like boss battles (at the end of several levels, you “fight” against a computerized opponent), movement (in some levels your frog scrolls left and right or can hop from one location to another), and power-ups (shoot cannonballs that destroy balls on-screen or lasers to precisely remove individual balls). Here’s a screen from the new game.

Seriously fun. Jenn and I have been playing quite a bit since we got it and have had a blast.

Now, admittedly, the main game seems to be slightly easier than the original Zuma. I’m not sure if that’s intentional or if maybe my hand-eye coordination has increased since playing the original, but we were able to get through the story mode of Zuma’s Revenge fairly quickly. Thankfully, there are a bunch of other game modes in Zuma’s Revenge that let you keep coming back for more, and those are more challenging (if that’s what you’re looking for).

Only real downside I can see is that they don’t have it on Xbox Live Arcade, just PC. I’m not a PC gamer, really, and our computer’s not geared for PC games, so I had to switch from full-screen to windowed mode and turn off the HD graphics. It still looks great, it was just slow with all the bells and whistles on.

If you’re into puzzle games, Zuma’s Revenge is worth checking out.

(Full disclosure: I got a free license for the game from Popcap.)