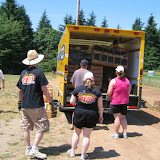 Jenn and I normally go work on a professional fireworks shoot each year, but this year was special - we were in charge of our own show in Sandy, OR.

The show was actually sponsored by the City of Sandy and they had some donations come in to make the show larger than last year’s, so it turned out there was a lot to shoot. I think we calculated it at just under 900 individual shells and seven pre-fused boxes.

Setup took five or six hours because it was pretty hot out and we took frequent breaks to rest and rehydrate. Something different about this show than we’d dealt with in previous shows was that we were burying the mortars in sand above ground, rather than having a trench to put them in or wood legs to attach to the mortar racks. Setup went smoothly, though, and we had a couple of hours to eat and rest before the actual shoot.

The show proper lasted 33 minutes, which was almost 20 minutes longer than the previous year’s show. We were told we were trying for a “20+ minute show” and we thought we’d try for about 25 minutes so it wasn’t too long (people get bored) and it wasn’t too short. We didn’t know how fast it would go, so we started off taking our time… but Jenn was watching us with a stopwatch and saw that we got to the 1/4 mark and were eight minutes in, so we sped up. By the time we’d shot half the shells, we were going as fast as we could light them.

Clean up went super-fast, just around an hour, and we got a bit of help of some of the community emergency response team folks in picking up garbage. While half the team picked up trash and raked, the other half loaded the mortars back on the truck, and that was that. Smooth sailing.

Our team was new to the fireworks game and they did a fantastic job. Big kudos to Ronda, Paul, Torin, K, Curt, Jessica, and Garth - you guys were awesome.

Really, there were only two small snafus we ran into.

First, I’m not super comfortable driving large trucks, and this was a pretty decent sized truck. I had a little bit of a mishap involving the gutter above my garage and the back of the truck due to some misjudgment in the length of the truck. No damage to the truck at all, but I’ll be getting a new gutter.

Second, we had a rough time finding someone to open the gate and let us onto the field to start the setup. Sgt. Shawn Burns from Sandy Police totally came to our rescue with that and with anything else we needed all day - huge thanks to Sgt. Burns for all of the help!

After all was over we got several compliments from the people working security and from some of the spectators saying this was they best show they’d seen in years. That’s really what makes it worthwhile - the cheer of the crowd and the ability to legally and safely light off some pretty amazing explosives.

Definitely a good show to work. It could have been a little cooler, but only having to drive an hour or so and easy clean up? Can’t be beat.

UPDATE: Here’s a video of the show from the crew perspective: