The B-52s at the Oregon Zoo 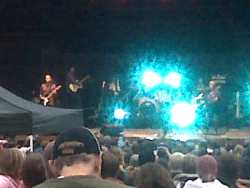 Jenn and I went on a little adventure on Friday night and saw The B-52s live at the Oregon Zoo. The zoo has a pretty awesome concert series going this year and we figured since we’d never been to a concert at the zoo before, this would be a good one to start with.

The tickets let us into the zoo at 4:00p, the doors to the amphitheater opened at 5:00p, and the show started at 7:00p. We got there about 4:30p and the line was already super long, so I guess now we know - get there at 4:00p. We still ended up getting decent seats - not awesome, but decent - about halfway back.

The only real problem was the rain. Between, say, 5:00p and 7:15p it was raining like a torrential downpour, so Jenn and I were sitting on these little lawn chairs we brought, huddled under a blue plastic tarp, sucking down a $25 pizza and a $6 drink. Not a big deal since the opening band, The 88, was okay… but not awesome. (It reminded us a little of the Paul and Storm song “Opening Band.”)

Then The B-52s came out and the rain stopped (or, at least, kept to a very, very light drizzle), and people stood up and danced. As much as you can “dance” in the middle of a soaked-out zoo amphitheater, that is, so it was more standing and bobbing up and down. But there was definitely movement.

They totally rocked. I’m a latecomer to the whole B-52s thing, so the stuff I’m most familiar with is off the Cosmic Thing album and a few of the radio hits. They played some that I wasn’t familiar with but liked a lot so I ended up doing a little Amazon spree to get a few of the earlier albums. Kate Pierson still has it and is still one of my favorite voices, and Fred Schneider with his unmistakeable sprechgesang style is just fantastic.

Their part of the show ran, oh, maybe an hour and a half, then they were done, but it was a great 90 minutes. Hearing “Love Shack” and “Rock Lobster” live was worth the price of admission. “Knock a little louder, Portland!”