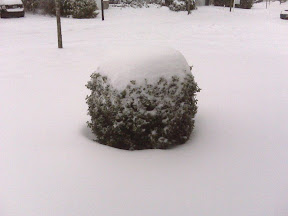 I am going out of my fucking mind with this snow. I hate snow.

Seriously. I’ve been stuck at home for like four days now and the snow just keeps getting deeper, indicating that I’m going to be stuck here until time ends, or at least until next weekend when it’s supposed to get warmer and melt off a bit.

Yesterday ended with about 10” of snow and a quarter-inch sheet of ice on top of that, so you had to break through the ice if you wanted to walk around.

I tried to take the garbage out yesterday, but I can’t because the snow has piled up so high I can’t get the gate to the cans open. I’ve repurposed a recycling bin as a temporary garbage holding area until I can get to the cans. No, the irony of using a recycle bin as a garbage can is not lost on me.

The local news stations are calling this “Arctic Blast 2008.” I guess they all get together and decide what to call various weather systems so the reporting is consistent. I guess “Arctic Blast” is as good a name as any.

I’ve been able to work from home, but Jenn’s stuck at home and unable to work, which means I’m in here sitting at the kitchen table, destroying my back in these crappy chairs, trying to do tasks that require a lot of in-person collaboration without actually getting together in person with people, and she’s in the other room playing Lego Batman. I wanna play Lego Batman and not work. There are so many other things I can imagine doing at home that don’t involve work. I have months of comics backed up that I could read. Movies to watch. Games to play. Cats to pet. (OK, I admit I pet the cats while I’m working at home.)

Anyway, working at home is a motivational challenge. I’d much rather be in the office since then I could get my collaborative work done and not be distracted by, say, a kitten jumping out of the Christmas tree like the squirrel in Christmas Vacation.

You’ll notice there aren’t any of the old “classics” on there like Miracle on 34th Street or It’s a Wonderful Life. I’m just not into them. I mean, I’ll watch, but for various reasons, watching Die Hard (the original) is what really says, “It’s Christmas!” to me.

The house is somewhat decorated for Christmas. Our new kittens, Kai and Stan, are pretty destructive little beasts, so we’ve been slowly introducing things to them in an effort to “warm them up” so they don’t just go apeshit and destroy everything. We figured that we couldn’t hang the stockings from the fireplace because the hangers were only really made to support the weight of the sock and a few small gifts, not the weight of a kitten, so we’ve got them hung by the stairs. We had to use nylon rope to hang them because they chewed through the ribbon we started out with and the string we subsequently replaced the ribbon with. We have a fake tree and the bottom row of branches is totally bent down and looks horrible because the kittens “ride” the branches and attack them. (You wouldn’t think they could break off metal branches, but they did break a piece of one off.) Jenn put gifts under the tree and the kitties have been helping by chewing the living crap out of the bows. I’m surprised the packages are still wrapped.

We introduced the kittens to snow, which was pretty funny. They’re indoor kittens so they really don’t get to experience some of that stuff first-hand. We filled up a Tupperware bowl full of snow and brought it in. They dig around in it, pull some out onto the floor, shake their paws (it’s cold!), and then smack the snow across the floor. They’ll watch it go, then dig some more out and the process continues. They pretty close to emptied that bowl of snow out onto the floor.

Let’s see, what else has gone on during the snow?

Our Scooba broke. I think the pump in it went bad. It just puts this blue light on, the equivalent of your car’s “Check Engine” light. After jumping through a few support hoops, it turns out Scooba is no more. Lame. Now I need to decide if we want to replace it or not. They have an out-of-warranty replacement program that gets you a new robot for a steep discount and I’ll probably be participating in that. I really like the Scooba and it does a pretty decent job. In the meantime, I guess we’ll mop the old fashioned way.

The movies we’ve been watching have mainly been through my media server, just proving the functionality, which is really cool. Having access to the movies is really nice and super convenient. 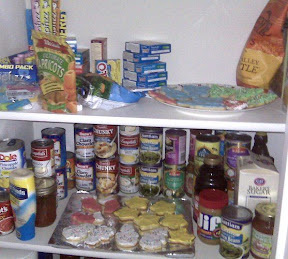 Jenn’s been making a lot of cookies and baked goods while we’re stuck at home. A lot of cookies. They’re freaking everywhere. Counters, cupboards, fridge…

Needless to say, I’m probably not eating as healthy as I should be. I had a rum ball for breakfast this morning as Jenn was yelling in from the other room, “That’s not a breakfast food!” Hmmm. I guess it is now.

That and egg nog, some of which my cat is being very persistent about trying to get.

Oh, here’s an entirely unrelated story but something I was going to blog anyway. We had a cat pooping on the floor next to the litter box. Not sure why, but it’d always be right next to the box. Pee in the box, poop outside the box. Couldn’t figure out why.

Talked to the vet, and there are two reasons a cat will do something like that: medical or behavioral. Since the poop was solid, it wasn’t medical, so we figured it was behavioral.

Behavioral reasons include the cat not feeling safe in the box, the cat not liking the litter, the box being inconveniently located, and so on. So, to address all of these things, we added a second box in a different corner of the room and made sure there was no top on either box so no one would feel “pinned in” or anything - your choice of location, easily escapable, for your pooping pleasure. We also put a Feliway plug-in there in case the kitties were feeling nervous. (Feliway is a cat pheromone analog that calms cats down. Humans can’t smell it.) None of this stopped the issue. You know what it was?

We had two pretty big boxes (the large size at the store) but our new kittens are serious diggers - like little steam shovels. The vet recommended we get a bigger box, just to see. We ended up getting this thing that resembles a gigantic Rubbermaid storage container. Takes 25 pounds of litter to fill. But you know what?

No more poop on the floor.

So there you go.

Anyway, that’s about it going on around here. Cabin fever has set in, and we’re waiting for the snow to go.

Here’s wishing you and yours peace and love for the holidays. 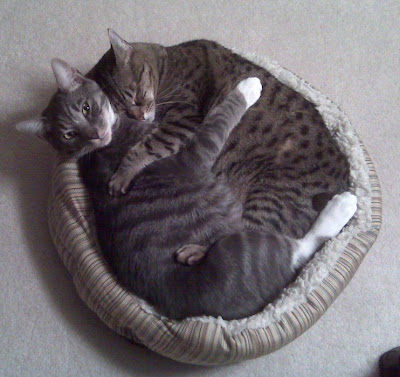