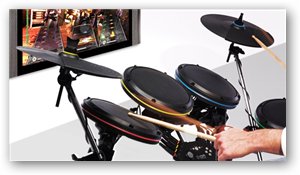 I love playing Rock Band, and when I get the chance to play, I usually play drums.

I’ve seen this kit from Ion in some of the game magazines and on web sites, but I finally found the official site for it: the Drum Rocker kit from Ion.

Admittedly, I play on medium difficulty. I’m no expert by any means. But the noise the standard drums generate plus the sometimes questionable accuracy plus the fact that I’ve always wanted a drum kit… sort of sounds like it adds up to this.

I damn near clicked that pre-order button just now. Just the $300 price tag stopped me. It may not stop me for long.

« Learning to Think in the Abstract
Failed to Upgrade to Subtext 2.0 »