Had a bit of a PS3 weekend this weekend. Realized I had the PS3 but really hadn’t played any games on it, using it primarily as a Blu-ray player, so thought it might be time to see how it went.

The first game I picked up was Echochrome. It’s sort of like “MC Escher: The Game.” The idea is that you’ve got this little mannequin that walks around on a sort of wireframe-looking level that obeys certain “laws of perspective” like “perspective existence” - if you can’t see an obstacle, it doesn’t exist. It’s sort of hard to explain - watch the video.

What I like about it is that it makes you think in a different way. A level that looks impossible to traverse is actually pretty simple if you think in perspective. It’s definitely worth the $10 I paid for it. 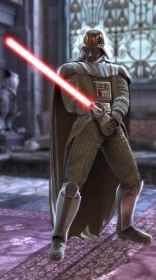 The second game I got was Soul Calibur IV. I debated whether I should get this on Xbox 360, where the “special character” included is Yoda, but decided that the PS3’s special character, Darth Vader, would just be cooler to fight with. Yoda’s neat and all, but I don’t really think “bad ass” when I see Yoda. It’s more… novelty value. Darth Vader, though, I’m thinkin’ that boy’s gonna put the beat down on someone.

Jenn and I put a few rounds in here and, while I was pretty decent at Soul Calibur III, Jenn kicked my ass like nine out of ten rounds just by button mashing. (She’s really good at button mashing.) I’ll have to bust out the guide and practice up again. It’s been a couple of years since I played SC3 so I’ve gotta get back in the groove. Still, tons of fun, and totally great graphics and sound. A total step up from SC3 and a good way to get myself into the PS3 game world.

One thing Jenn and I noticed while playing SC4: On PS3, when you turn it on, you can “sign in” to the Playstation Network with an account you create, which then associates purchases, etc., with your “profile.” This seems very similar to the Xbox Live account sort of thing, where you sign in and then play games and achievements get associated with your profile. On Xbox, though, when you play two people at the same time, both of you are signed in - I get signed in on my control, Jenn gets signed in on hers, and when we play, each of us can unlock achievements.  PS3 doesn’t have achievements (there’s a notion of “trophies” that’s still pretty new) and it turns out you can’t sign multiple people in at the same time, so we ended up playing with only me signed in even though Jenn has her own account. We both thought that was sort of weird. Hopefully they’ll fix that in the future.

« How Do You Find Interface Implementation Overrides Via Reflection?
Creating Resource-Only Assemblies »