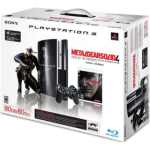 Jenn and I enjoy our movies, and I’m not (too) ashamed to say I jumped into the HD DVD camp, so when HD DVD died, we started saving up for a PS3. When the MGS4 80GB bundle came out last week, we picked up a PS3 as a Blu-ray player.

There are a lot of things I didn’t know about the PS3 that I thought I’d share. You hear about the gaming and Blu-ray playing, but not some of the other things.

You’ll need a better video cable. Out of the box, you only get a composite video cable. It makes sense from a lowest common denominator standpoint, but you’ll want to see an HD picture, so get a better cable. You can either get a proprietary PS3 component video cable set or you can get a standard HDMI cable. (Get the cable ahead of time - Best Buy really gouges you on HDMI. Like, “10x price difference” style. I’m not afraid to admit I fell into this trap because I needed to get the thing hooked up and it’s too late for me… but not too late for you.)

Sound only comes from one output at a time. You get to choose - does it come through the optical out or through the HDMI cable? You don’t get both. (With Xbox, it comes through both simultaneously.)

You can’t use your universal remote with it. Everything on the PS3 is through Bluetooth including remote control support. Unless you don’t mind controlling the movie with a game controller, you’ll be buying a PS3 Bluetooth remote.

It may be quieter than Xbox, but it runs just as hot. I thought I had heard this thing ran cool and quiet. I was wrong - it’s just quiet… until it heats up, when it sounds like a jet engine. I had put it in the entertainment center with plenty of space around it but it turns out we have to leave the door open when it’s on because it really heats up and the fan kicks into serious overdrive.

The PSP integration is awesome. If you have a PSP, you can attach it to your PS3 and do what they call “Remote Play” - basically remote control the PS3. The audio and video come over the wireless network and render on the PSP. Some games let you remote play, too, so you can start a game on the PSP and pick up where you left off on PS3. I haven’t done that yet, but it sounds cool.

Games on the Playstation Network are priced in dollars. PSN is the Sony equivalent of Xbox Live. Except on Xbox Live you buy games with “points” and have to do conversion rates in your head. It’s in standard currency on PSN.

Audio/video setup is tricky. You have a lot of control over the settings used for outputting A/V signals - down to which stream types and bit rates come out the optical audio feed. The auto-setup actually detected some things wrong so I wasn’t getting any Dolby Digital out. For a non-tech person, I can see that getting it right could be a challenge.

It has a web browser. What’s cool about this is you can do a quick check of movie times or Google something from the couch. It’s not an awesome browser, but it suffices.

You can install a second OS on it. There’s a menu option to partition your hard drive and install a second OS. It reminds me of the short-lived PS2 Linux kit they had out. I’m not sure what your options are for OS right now, but it’s a forward-thinking option.