His Name Was Jack

Yesterday our cat Jack passed. He was only about a year and a half old. 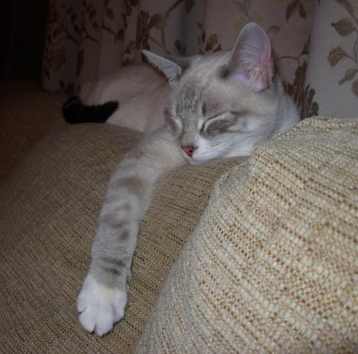 We got Jack back in February of last year after Jenn’s cat, Semper, died just before Christmas 2006. He was a Siamese-Tabby mix with beautiful blue eyes that always said “I’m innocent!” even after he got into trouble.

He was a wild man and a lot of fun. While most cats will have their “wild half-hour” in the evening, Jack had more of a “sleeping half-hour” and was a maniac the rest of the time. We named him Jack after the character Jack Bauer on 24, because Jack Bauer’s always “gone rogue” on the show, and this little guy was rogue all the time. He never got tired of playing - to the point where he’d get so tired he’d pant like a dog with his tongue out (which isn’t normal for a cat) but still wouldn’t stop running around. The above picture was one of his few calm moments from around a year ago.

He loved rubbing his little rubbery cat lips against your nose. He also liked to lick your nose, which got to be sort of a game where you’d pick him up and tell him to “pay the toll” and he’d reluctantly lick your nose after some cajoling. He loved being chased around the house. He loved running through this “cat racket tunnel” we have in the living room (and, boy, would he make a racket!). He loved tormenting the other cat we have, Xev. He loved hiding under your legs if you were sitting on the floor (sort of a “cat fort”). So playful and loving.

In the last few months of his life, he started puking on a weekly basis (we called him “Rain Man” because he’d only puke on Sundays and only on the carpet) and it looked like he might have a food allergy or inflammatory bowel disease (both of which are common). He also started peeing in places he shouldn’t, but after taking him to the vet we found the two behaviors were unrelated - he might have something causing him to puke, but he was peeing (not marking, just peeing) just to be a jerk and assert himself.

We took him in to a high-end referral center yesterday to get him endoscoped and find out for sure what was causing him to puke so we could treat the right thing - whether he had eaten something he shouldn’t have (not surprising) or whether it was IBD.

At the center they checked him in and gave him a mild pre-op sedative in preparation for the full anaesthetic. They also put in his IV and a technician put him into his cage. Jack started “burrowing” under a towel in his cage, so the tech - still standing right there - sent another tech to get a nice fleece blanket for him. Before the other tech could return with the blanket, the first tech noticed Jack had collapsed and was lying in an odd position. They immediately got the doctor and saw that Jack’s heart was down to 20bpm. They started some emergency procedures and gave him some drugs to get his heart rate back up but he never really recovered - he started bleeding from the mouth and his heart stopped shortly after that. They tried CPR on him for 10 minutes but were unable to revive him.

The doctor, who is very highly rated, was absolutely stumped. There was no reason for him to collapse, no reason for this to happen. They were so stumped, they offered to do an autopsy for free to find out what happened and make sure this doesn’t happen to other pets. We took them up on it and preliminary results literally didn’t find anything. He looked like he had IBD (as we suspected), but no one knows where the blood came from that was draining from his mouth. Some tissue samples have been sent off to the lab for analysis, but this really was a freak occurrence. (Update: It looks like Jack died of epinephrine reversal.)

It was totally unexpected and we don’t blame the doctor or the facility. Of all the patients they had in that day, Jack was the one they were least worried about because he totally checked out as healthy. It’s just an unfortunate circumstance that’s thrown our little world into disarray.

Jack was a very sweet boy. If you met him, you loved him instantly, even if you weren’t a cat person. We had a lot of fun together and we were looking forward to many more years of fun with that wild little boy that now will never be seen.

I’m sorry we didn’t get to spend that time together, Jackal-boy. We’ll miss you and we love you.