Titanium, Tungsten Carbide, and "The One Ring"

My wedding ring is a titanium version of the One Ring from Lord of the Rings. I like it quite a bit, but it was a real pain to get - the only place you could find them was this German web site which seems to have disappeared since we bought it. Plus, the black finish is beautiful but it scratches given a little effort so you have to be careful. (Metal doorknobs can be problematic if they turn hard, for example, so you have to be pretty mindful of what you’re doing.) Sort of lame considering I was going for nigh-indestructible.

Anyway, in the event I have to re-order, I found a couple of options. Boone Titanium Rings has a good general selection and will let you submit custom artwork to create your own laser-etched titanium ring. Now, that’s cool and all, but I think the one I’ll go with will be a tungsten carbide diamond-etched “One Ring” from Forever Metals. 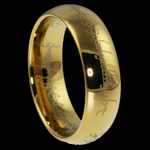 I admit a lot of ignorance when it comes to jewelery and metals and such, so I didn’t really fully understand the differences between hardness and durability between titanium and tungsten carbide. There’s an educational page on the Forever Metals site that explains tungsten carbide and its benefits. Things like “scratch-proof” and “four times harder than titanium” show up there, which makes it perfect for me.

Of course, Jenn got all worried about what happens in an emergency and the doctors can’t get the ring off your finger so they have to cut off the finger instead. I thought I was already hosed with the titanium ring, but apparently you can cut titanium with almost any tool that will cut steel, including a Dremel. As for tungsten carbide, Forever Metals claims:

Tungsten carbide ring can be removed by a medical professional. Rings made of extremely hard materials, like tungsten carbide or ceramic, can only be removed by cracking them into pieces with standard vice grip style locking pliers. Standard ring cutters will not work.

So I’m not screwed and shouldn’t lose a finger as long as the medical professional helping me has a pair of vice grips. I have to assume the medical field has figured this one out. Or maybe I should get one of those MedicAlert bracelets that says, “Don’t cut off my finger, just get some channel locks.”