My Chemical Romance - The Black Parade 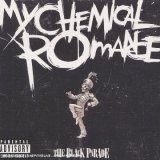 I’m a little late to the game on this one, but I’ve really been enjoying The Black Parade album by My Chemical Romance.

I think it started out by playing Guitar Hero II - one of the songs in there is “Dead!” which is from this album.  Jenn and I got 100% on that song (on “Easy” level) playing cooperative and it kind of stuck in my head.  I’d heard “The Black Parade” on the radio and liked it, so I figured I’d give it a run.

The album actually reminds me a bit of Pink Floyd’s The Wall - it plays out like a story, with the music style changing with each song, and in many cases becoming very… theatrical.  “Dead!” and “The Black Parade” are my favorite songs on the album, but the whole album is generally pretty darn good and is a very easy listen from front to back without having to skip any of the songs.

I can’t say I’ve heard much anything else by My Chemical Romance, but it does make me curious to hear more.  Maybe I’ll have to pick up something else by them and see how it fares.  Regardless, this thing rocks, and I totally recommend it.