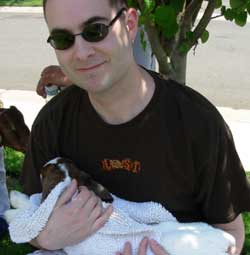 Yesterday Jenn and I went over to my parents’ house because there were strange things afoot. My parents’ condo association has this overgrown area they need to clear the vegetation from but they wanted to do it in an environmentally friendly way. After looking at all the options, they hired a company called Noah’s Nibblers to do the work.

What they do is bring in goats - a lot of goats, like over 100 goats - and basically just cut them loose in the area that needs to be cleared. The goats eat the vegetation away, clearing the area without use of chemicals. Apparently they do a lot of work with the Army Corps of Engineers. I had no idea.

I’ve never seen that many goats in one place. I think my goat experience was pretty much limited to childrens’ petting zoos and such. Seeing literally a herd of goats mowing their way through an area is definitely something new.

Along with the herd, they brought a baby goat with them, less than 24 hours old, that the mother had rejected. We got a chance to hold him and feed him, and it was neat to see him walk his first few steps.

Anyway, that made for a pretty interesting Saturday. I’ve posted some pictures in a web album for those who want to see more. I don’t think the pictures really do it justice. The area they were eating down was on a hill, so it was tough to get a shot that really showed the craziness.

« EmbeddedPageHandlerFactory - Binary-Only ASP.NET 1.1
Sopranos: What the Hell Was That? »