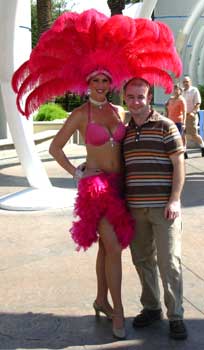 I’m recovering today from a pretty crazy weekend in Vegas. Stu, Jason, and Adam went with me down to Vegas to do the bachelor party up right.

We headed down there on Friday and checked into the Aladdin (which is being refashioned into the “Planet Hollywood Resort and Casino”). We took most of Friday to trek around the central and northern portions of the strip, seeing the Bellagio, Caesar’s Palace (and the Forum Shops), and the Paris (still my favorite place down there). We even ran past a place where Richard Kiel (“Jaws” from the James Bond movies) was signing autographs. Very cool.

We also went to the Star Trek Experience and rode the two really cool motion simulator rides (Jenn’s not a big Trek fan so I didn’t see that last time I was there) and after almost more Trek than one person can handle, we ended the night at Scores (it’s a bachelor party, right?).

On the way back to the Aladdin, the cab driver lady, in severely broken English, asked us if “we liked the girls.” Yeah, we did. Then, in further broken English, informed us “there are places you can get fuck.” Whoa, whoa, whoa. Nice shootin’, Tex. Let’s just reel that in a couple of notches, there. Why don’t you just drop us off back at the Aladdin and we’ll call it good, shall we? Man, the cabbies there are an interesting bunch (we had several other interesting cabbies while we were there, providing us with a variety of entertainment and near-death experiences).

Saturday morning found Stu and I chowing down at the buffet at the Paris, which is my favorite buffet down there. The line was incredibly long but moved along at a reasonable pace.

After breakfast, we walked down to the Wynn so Stu could check out the Ferrari store in there. It was a hell of a walk to get there, but the store was really cool and Stu came out with a cap and a polo shirt for a not unreasonably gouging price.

We walked back down toward the Aladdin and stopped in at various places on the way, making another run through the Forum Shops and such, before taking a break for an hour or so to let our legs stop aching like death.

Jason and Adam, during this time, were playing in a poker tournament at Caesar’s Palace. I don’t remember exactly how well they did, but I do recall later that night hearing mumblings about certain shirts being unlucky and not doing as well as planned.

We recovered from the walk and then headed down to see Luxor, New York New York, Excalibur, and MGM Grand. After the poker tournament, Jason and Adam met us at the MGM Grand and we ate dinner at the Rainforest Cafe.

Once dinner was over, we hung out for a little while longer, and Stu and I parted ways with Jason and Adam and we headed over to see KA.

KA is, in a word, awesome. And if you’re in the center of the front row, it really feels like the only people in the entire auditorium are you and the performers. It makes the show super personal, and I don’t think I’d have traded that. Most of the action happened no more than ten feet away from me - less than that, most times - and it really made me feel much more involved than in some of the other Cirque shows I’ve seen.

Speaking of other Cirque shows, this one is very different than the others. The shows I’d previously seen were loose, abstract stories where some pretty cool acts were strung together to make sense. KA plays out more like a story and the stuff they do is more like a stage performance than a circus act. Not only that, but the set pieces involved in this show are spectacular. Huge sections of the stage fly around and rotate, most of the time with performers on them. It’s really not like anything you’ve ever seen, and I really can’t recommend it more highly.

So we got to KA and our tickets were taken by a fairly brutal looking Chinese guy (in character, of course - everyone’s in character) who harshly pointed us to the entry we should take to get to our seats. It was restroom break time, though, so I headed over to the restroom.

There was this bathroom attendant in there, another Chinese guy, but he looked more like he was 70 if he was a day. There was this large trough in there with spigots coming out of the wall where you washed your hands when you were done. The attendant (who was very reminiscent of Mr. Miyagi) turned the water on for you by waving his hand over the spigot. Pretty cool. I got my hands wet, soaped up, and the water turned off. Here’s the thing - I couldn’t get that stupid water on to save my life. The little Chinese guy came over, waved his hand, and water came out. Water stopped again, and again I couldn’t figure this thing out. Three or four times the guy had to come over and turn the water on for me, and man, he was getting the hugest kick out of it. Just laughing and laughing and mumbling in Chinese. Too funny.

Another fairly harsh Chinese guy directed us to our seats up front and center and told us it was nice knowing us as fireballs shot into the air from the stage a few feet in front of our seats. A nice lady (the “wife of the village mayor”) told us that the Emperor would be very angry with us if we put our feet on the edge of the stage or if we leaned over the edge to look in, so we decided that we’d refrain so as not to incur the Emperor’s wrath.

The show, which was indescribably amazing and involving, started at 9:30p and ended at 11:30p. There was no intermission (which is different from other Cirque shows), which was sort of unfortunate because I really needed a Red Bull or something. After walking all over during the day, some of the music of the show was beautiful and calming, and as amazing as the show was, I felt so relaxed my eyelids started getting heavy. No, I did not fall asleep - but I could have used a little caffeine.

KA is now my favorite Cirque show, and the $150 ticket for front row center was well worth it. I can’t imagine seeing it any other way, and that feeling of personal involvement in the show made it all that much more memorable.

After the show, Stu and I walked back to the Aladdin and crashed, just in time to get a couple hours’ sleep before leaving for the airport at 6:15a.

We were home in Portland by 2:00p and I unpacked all of my stuff and lazed on the couch for a while before Jenn got home from a baby shower she was at. The story of the trip was relayed, gifts were given, and the evening proceeded as usual.

I’m glad I took today off to recover as my feet and legs are killing me. That always seems to happen when I go to Vegas, but it’s always worth it. It was a hell of a weekend and I totally can’t wait to go back.

Something I noticed that is probably good in some cases but kind of sucks, too - I didn’t get a lot of pictures while I was down there, and those I did get don’t have me in them. That’s actually why picture up at the top is Stu with a showgirl and not me - there was just so much going on that I never remembered to take pictures and no one else really brought a camera with them. But, then again… maybe it’s better that way. Hehehe.

Only two weeks until the wedding and a trip to Aruba. I anticipate some great times there, too. 2006 has been a hell of a year and it’s not even over yet. Gonna be hard to beat.

« Mocking with TypeMock
MediaPortal and DVD ISO Seems To Work »