Goodbye, Granddad - I Love You

We had just visited him on Sunday and he wasn’t doing too well, having to be on medication for pain and anxiety. I hugged him goodbye that day, and it didn’t really sink in at the time that that’s the last time I’d ever see him alive. I mean, I guess maybe I knew on an academic level, but just hadn’t really accepted it.

Granddad was a great guy and a hell of a lot of fun. Strong, confident, and multi-talented - in recent (and not-so-recent) times, he’s been known to play the guitar and the organ; mine gold (yes, by himself, for days at a time); work with wood, metal, and glass in a variety of fashions; ride his motorcycle all over the place; and travel from border to border in his motorhome.

He was a crazy old guy and he had his own way of doing things. He’d drive all the way to Mexico to get his dental work done “because it’s cheaper” and come out with a mouth so full of gold teeth any rap artist today would have been proud. He wasn’t remotely politically correct, and you may have been offended, but, well, it was Granddad and you’re just not going to change him. He’d only ever feed his dog Milk Bone treats even though that’s really not good for the dog.

And he always had a dog, at least for as long as I can remember. All of his dogs seemed to be wild around people, jumping on you, licking you, wanting to be part of the action. When I was little, he had a dog, Poncho, who wasn’t a big dog, but I was mildly scared of him because he was a jumper. The dogs didn’t seem to do that as much to Granddad, though, just the rest of us. 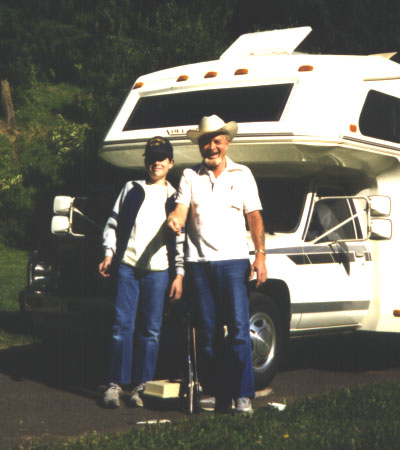 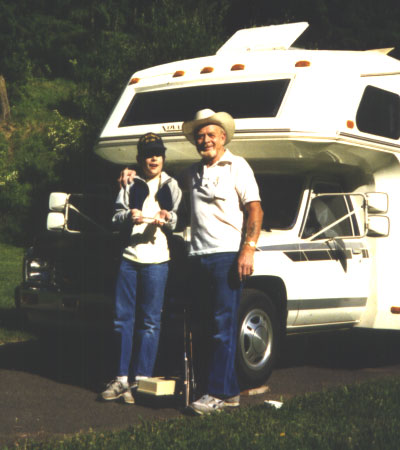 These photos are from a three-day fishing trip he took me on back in June 1988. This was the first fish we caught on that trip. In the first picture I dropped the fish and Granddad tried to catch it just as the camera snapped the photo. The second photo we figured out how to hang onto the fish.

We had some pretty good times together, whether just spending the day at his place or driving out to eastern Oregon where he used to have a cabin by Wallowa Lake (actually, Dad tells me it was Pine Hollow Reservoir, but I somehow remember it as Wallowa Lake). Christmas was always a visit to Granddad’s place to see my mom’s side of the family and eat until we were stuffed. Hanging out with Granddad always meant there was some fun that was going to happen.

He lived by Meinig Park in Sandy, OR and the whole family would get together at his place every year to see the Sandy Mountain Festival and visit. Some years he let the Kiwanis Club (or, as he pronounced it, the “Kiawannas”) plug their ice cream freezer into his power outlet outside (yes, he was that close to the park) and we’d get free ice cream. In the last couple of years I didn’t actually make it out for the festival, having seen and done it so many times.

His latest craft passion was making things out of wood with his scroll saw. 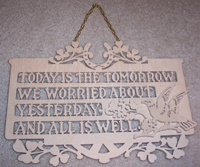 This is a picture of the housewarming gift he gave Jenn and I when we moved into our current place. It’s pretty cool, and I still haven’t decided if it’d be better to paint it or stain it. Maybe I should have asked him what he thought.

With some of the stuff he’d crank out, though, you’d wonder what he was thinking. For example, one year I got a unicorn pencil holder with a clock in it for my birthday. But that was just him, and it was always the thought and the time he put into making it that counted.

He lived life to the fullest, and had an almost cavalier attitude towards his own health. He was taking nitro glycerin tablets for heart trouble he was having, and I remember him telling us about how he had felt pain in his chest, so he reached down to the floor of the truck where his pills were rolling around (you’re supposed to be careful with the tablets - they’re fragile) and he took one… but he didn’t feel the effects soon enough, so he just popped a couple more for good measure (you’re only supposed to take one and then call the doctor). In the end, it looks like it was his lifetime of smoking that took him from us, the cancer spreading from his lungs through the rest of his body. I’m sad that he’s left us, but I’m so glad he’s no longer in pain. Hopefully, wherever he is, he is reunited my Grandma Lovey (that’s what we kids called her), who passed away many years ago when I was young.

Rest in peace, Granddad. I love you, and you will be missed.