Jenn worked yesterday, so I called up Stuart to see if he wanted to hang out. He came over and we decided to play some video games, since neither of us really have had the free time we’d like to dedicate to such things as of late.

We played some Time Crisis 3, which is a great PS2 Guncon game, but the shortcoming is the way it plays two-player: split-screen. Good luck shooting stuff you can barely see, and this is on a 32” TV. I have no idea how people with smaller sets pull it off.

OK, I can’t really justify that it has really anything at all to do with ninjas, other than the backgrounds with, like, trees and old Asian looking buildings. I think you shoot at some ninja-looking guys, but it’s “ninja” in the loosest sense of the word I’ve ever dealt with. 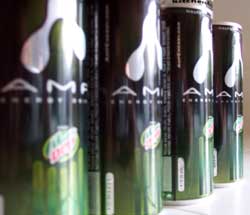 Anyway, this whole time, Stuart’s drinking Amp, a Mountain Dew-based energy drink. He’s downed his first, and halfway through the second he turns to me with a crazed Cornholioesque look in his eye and says, “You know what would be cool? Bongos. We should go get some of those Donkey Kong bongos and that game. We should get four sets of bongos so Jenn and Tiff can play, too. That’d be cool. We should get bongos.”

Seriously, how can you say no to bongos on a Saturday afternoon?

We figured we’d go after a quick game of two-player Katamari Damacy that lasted about three hours.

Jenn came home before we had a chance to leave. Stu called Tiff and told her to meet us at my house and we set off for the store. A little while later, we had four sets of bongos, two copies of Donkey Konga, some more Amp for Stu, and a soul-level need to beat drums.

When we got back, Tiff was already at the house waiting for us. We pre-empted the drive to drum long enough to go eat at McMenamin’s Grand Lodge (tasty!), then we got back and plugged those bad boys in.

It took a little while to get used to, but very quickly we were drumming with the best of them. For those unaware, the premise of the game is to beat the bongos and clap along with a song that’s playing in the game based on symbols you’re shown. There are four symbols: hit the left bongo, hit the right bongo, hit both bongos simultaneously, and clap. There’s a microphone in the drum set that captures the clap sound.

We discovered (long after the fact) that the sensitivity of the microphone can be calibrated, which is a good thing since the largest issue we had was that when one of us would clap, it might register on another person’s bongos simultaneously, causing for poor scoring. Or if the TV was up too loud, you’d get “clap feedback,” where you clap, then the “clap” sound fires on the TV, which gets picked up by the bongos as a clap, which then gets played back by the TV… pretty soon it sounds like firecrackers going off. Definitely gotta turn that sensitivity down.

All in all, though, an absolute blast, and much needed after the grinder work has been lately. 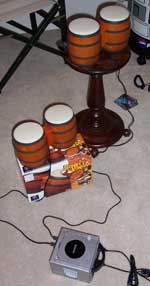