I figure I should probably spew the details of Christmas this year so folks are up to speed, plus I’m gonna forget if I don’t dump it, so here goes.

Christmas Eve was the more hectic of the two days. About 2-ish in the afternoon we hauled over to Jenn’s maternal grandparents’ house on the other side of town. I won’t lie; it felt a little awkward. There wasn’t a lot of talking or anything, there was a small amount of gift opening, but generally that was it.

Jenn’s dad had taken an antihistamine or something before he got there, so he was a little tired. He ended up crashing on the couch not an hour into it. 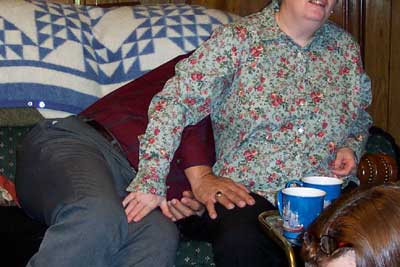 After that, we headed over to my parents’ condo, but we didn’t stay there long before we then, as a group, went over to my grandparents’ apartment. That was great fun, as evidenced by my dad. 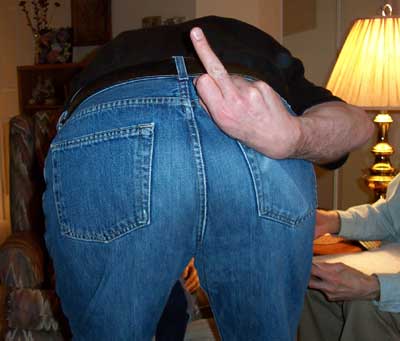 Actually, it wasn’t that bad, Dad was just having some fun with me because I was being a little overzealous with the camera. Heh. We stayed there a while, then went back to my parents’ place and opened stocking gifts.

Jenn and I finally returned home by, I dunno, probably 10:00p.

Christmas Day Jenn and I woke up around 8-ish and opened the presents we got for each other. Jenn got a sweet deal on a GameCube bundle, so now a whole new world of gaming has been opened up to me in the form of Nintendo. This is actually the first Nintendo I’ve owned (not counting the GameBoy SP), and it’s an interesting thing. I’m really starting to notice the different approaches the consoles take as far as what gaming is/should be. In particular, Sony seems to have a lot of individual and network titles for PS2, implying a more one-or-two-person-per-console attitude, whereas Nintendo games have a more “party” atmosphere to them, allowing for four players simultaneously on one console more often. It’s an interesting approach, and one I sort of like - Jenn enjoys playing games with me, and with more “party” oriented games, it’s a more fun experience. 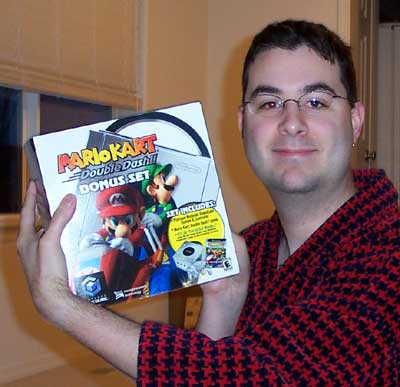 My parents and sisters were supposed to be at our place by 10:00a. They had other places to be later that day, so they were going to be out by 2:00p. They showed up a little after noon, which put a damper on any plans we had to play board games together and chat. Instead, we got straight to the gift opening, which didn’t last long (money’s tight this year since almost everyone in our family moved, which, for me, included the purchase of the house) because we did a “Secret Santa” style of giving, each person only buying for one other family member.

After that, we proceeded to play a few minutes of Dance Dance Revolution, which just reminded me how fun it is and how much I need a hard dance pad.

They took off, then an hour or two later Jenn’s family (the same crew that was at the Christmas Eve gathering) showed up for a lasagna dinner.

I already ranted about how I’m not a big “family dinner” person, and this was no exception. It wasn’t a bad experience, but I wasn’t having the time of my life, either. It all got better when, after dinner, we gathered ‘round the movie Elf and had some laughs.

They left around 8:30p or so, and that left Jenn and I to duke it out, GameCube style.

All in all, not a bad holiday, though I won’t lie: The entire season this year has not felt at all like Christmas. I’m not sure if that’s a sign of growing up, changing times, the chaos of life, or something else. Maybe a combination of all of the above.

Regardless, I hope everyone else out there had a happy holiday. On to the new year! 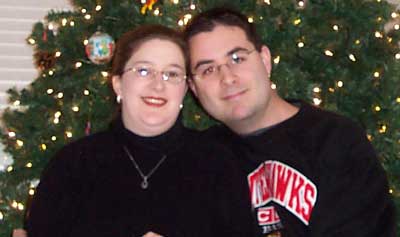