Hockey season, at least as far as the Winter Hawks are concerned, has begun. This means 36 home games between this past weekend and next March, which is quite a lot if you think about it.

We went to two hockey games this weekend - one Saturday night (which we lost) and one Sunday night (which we won) - and we’ve got another coming up on Wednesday. I love hockey season - it’s a social event, similar to folks meeting up at the local pub or whatever - but it sure does take a lot out of me.

At last night’s game, during the first intermission, two altogether too avid hockey fans got married at center ice, the team mascot acting as “best man” (or “best bird,” in this case). I’m not sure I’m into that. I think it’s cool to be a fan and all, but married at center ice at the second game in the season for a junior league team? That’s a little much. (The “best bird” dropped the ring in the middle of the ceremony and wasn’t able to pick it up off the ice with the mascot gloves on. They had to stop the ceremony and pick it up for him. Too funny.)

An idea came to me while watching the Zamboni ice resurfacer run its course around the rink at the game: They need to make a riding lawnmower that looks/works like a Zamboni. A Zamboni lawn resurfacer, if you will. The collection tank could catch the grass… it’d be brilliant. Maybe I’ll have to submit that idea to them.

Side note: Last month my dad was driving home from work and the motorhome behind him was driving a little erratically (according to witnesses). It then attempted to pass (or something) in a no-pass zone. For those who think they can pass in the no-pass zone, here’s the accident that happened right behind my dad: 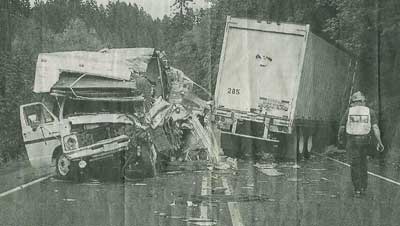 Pieces of motorhome landed on the back of Dad’s truck. Apparently they had to use the Jaws of Life to get the motorhome driver out. Crazy stuff.