I’m not much for cold weather, but that’s usually not a problem living in Oregon. It rains a lot, it’s dreary sometimes, but it never really just gets balls-out cold. I can probably count the number of times we’ve had snow that stuck in the past five years on one hand. That all changed, though, with this winter storm that blew in off the ocean. Yow! We’ve had snow, ice, freezing rain, gusty winds… you name it!

Since I am in Oregon, and Oregonians don’t know how to drive in the rain, let alone the snow, I decided not to go in to work today. Besides the fact that I don’t have chains or traction tires (should I happen to need them), I just don’t trust the other drivers in the area. Watching the morning commute, I saw accident after accident happening because your typical SUV driver thinks that just because they have 4WD it means they can drive a full 70mph across black ice without issue. So I’m at home, telecommuting via dial-up Internet access and VPN.

The inside of the apartment is warmer than it is outside, so condensation forms on the insides of the windows… but then it gets toward the metal window frame and freezes up, so we have ice crystals on the windows. My kitties are cold, too, so I pulled a chair up next to the fire for them and they’re nice and warm, cooking by the fire. 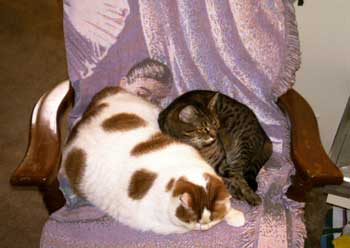 I’ve actually accomplished quite a bit today, all things considered. I’ve released a new version of the content on the company web site, wrote up a little programmatic redirector thing that will help folks out if they’ve got pages bookmarked that I moved elsewhere, and ran some troubleshooting on some intranet search engine stuff that was going wrong. Not bad at 56kbps. (Actually, 45kbps, plus the added degradation implicit in an encrypted VPN connection.)

The company closed up at 1:00p, but I’m still working. I figure I’m working at quarter speed due to the lame bandwidth situation I’ve got here so I’ll tie up a few more loose ends before shutting down for the day. Then I’ll get on working up the eBay auction descriptions for the items I’m going to sell (time to part with the Buffy t-shirts).